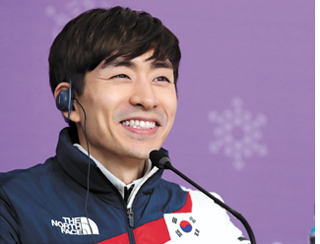 Lee Seung-hoon speaks during a press conference on Feb. 24. [YONHAP]

Lee, who won gold in the men’s mass start and silver in team pursuit at the PyeongChang Olympics, said he is hoping to reunite with de Jong.

“We spent a short time together, but I really learned a lot from him,” Lee told reporters after an event for PyeongChang Olympic athletes at Korea National Sport University in Seoul, also the skater’s alma mater. “I believe that he can come back to us. I’m waiting for him.”

De Jong, considered one of the top long-distance specialists in speed skating, came to Korea with an impressive resume, such as four Olympic medals, including the 10,000-meter gold in 2006 and seven world titles in the 5,000 meters and 10,000 meters.

De Jong competed at five Olympic Games, starting in Nagano in 1998. After winning bronze in the 10,000 meters at the 2010 Vancouver Olympics, de Jong and silver medalist Ivan Skobrev famously hoisted Lee, who won gold in that event, onto the podium.

The Korea Skating Union (KSU) previously said it is considering an extension of de Jong’s deal, depending on the opinions of skaters and other coaches.

“De Jong yesterday called me to say ‘Good morning,’ while eating ramen which I advertised on television,” Lee said. “We both checked we have each other’s e-mail address and phone number. I really want to see him again.”

Lee, a three-time Olympian, etched his name into the history books of the Winter Olympics with his performance at PyeongChang 2018. He is now Asia’s all-time leader in speed skating medals with five - two gold and three silver. The 29-year-old has also won at least one medal for a third consecutive Olympics.

“As I get old, some people ask me to do coaching, but that’s not an easy job,” he said. “I want to enjoy skating more. There are still skaters who are older than me who compete at a high level. That makes me more confident and I really want to do well at the 2022 Beijing Olympics.”