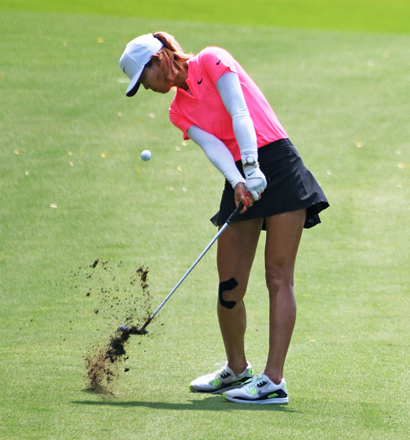 Michelle Wie of the United States hits her shot during the final round of the HSBC Women’s World Championship in Singapore on Sunday. [XINHUA/YONHAP]

Jenny Shin fell one shot short of winning her second LPGA Tour victory, finishing behind Michelle Wie of the United States at the HSBC Women’s World Championship at Sentosa Golf Club in Singapore on Sunday. Wie won the tournament at 17 under par, her first LPGA Tour victory since the 2014 U.S. Women’s Open. 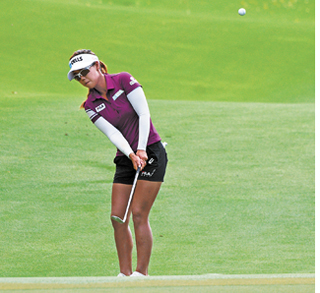 Jenny Shin watches her chip shot during the final round. [XINHUA/YONHAP]

Starting the final round tied for ninth, Shin had an impressive round, making eight birdies and a bogey to finish the tournament at 16 under par along with three other golfers. After starting the first five holes with pars, Shin started to make her way up to the leaderboard with birdies. From the par-4 11th, Shin made four consecutive birdies and with another birdie on par-5 16th, Shin took a sole lead.

However, it all came down to the par-4 18th. Once Shin hit her teeshot on the fairway, her second shot came up short of the green, behind the bunker. Failing to make an up and down for par, Shin let three other golfers at the time tie for the lead at 16 under par, being the first to finish the round.

Wie, who played in a group behind Shin, missed the fairway on the 18th, as she hit her tee shot into the rough. Wie’s second shot also came up short up the green, but rather than a chip and a putt, she took out her putter. By making a long birdie putt off the green, Wie broke the tie and finished the tournament a winner.

“I’m so proud of myself and my caddie and my entire team,” Wie said to the LPGA website. “It’s been a long time since I’ve been up here, so it feels pretty good. I wanted really badly to win, especially after what happened last year.”

In 2017, Wie was the leader after 54 holes, but allowed Park In-bee to take the trophy by a shot.

Once again, by a shot on the 18th hole, Shin repeated her disappointing runner-up finish that she had at the 2012 HSBC Women’s World Championship. At the time, Shin headed to the 18th hole with a one shot lead but the tournament was suspended due to an inclement weather.

Once the tournament resumed, Shin struggled, hitting her tee shot into the trees and receiving a one shot penalty. Shin finished the hole with a double bogey, forcing a playoff. Then, by the third playoff hole, Shin ended up missing her first LPGA Tour victory by losing to Angela Stanford of the United States.

With a 67, five under par, super rookie Ko Jin-young finished tied for sixth, the second-best finish by a Korean golfer in the field.

For the third consecutive week, rookie Ko managed to finish inside the top 10. Kim Sei-young finished tied for 10th at 12 under par, setting a course record on the final day at 10 under par. Kim made nine birdies, an eagle and a bogey to card a score of 62.