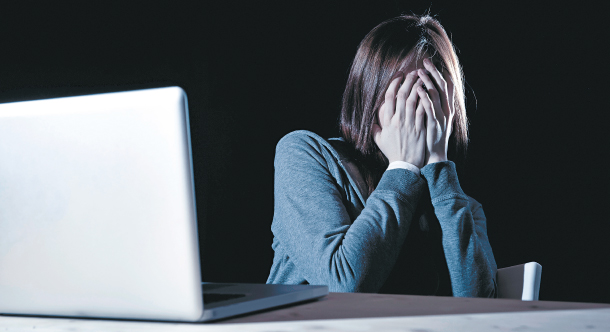 This photograph is from a database unrelated to the victim in the article.

You wake up one day and find out that your name, age, job, home address, phone number and even photographs of you and your house have been posted all over the internet, on every website you could think of - from Facebook, Tumblr and Instagram to small private internet cafes made specifically to share your information. Later, you even see photographs of your face placed on a naked body that is not your own. The text underneath the photo reads, “Let’s meet.”

None of it was posted by yourself, but by your ex-boyfriend. You go to the police, with a folder filled with screen captures printed out as evidence in hand, but end up being told that nothing can be done about it and are sent home.

You turn on your computer, and see yourself on screen again. The police said there’s nothing they can do.

Although it may sound too dramatic to be true, this is the story of what 32-year-old Kim Ji-young (alias) went through towards the end of 2017. In an interview with the Korea JoongAng Daily in February, Kim came forward with how devastated she was by online sexual crimes starting last November, and how she still remains victimized to this day, due to the loopholes in the current legal system.

“I found it hard to live on, but harder yet to die,” said Kim.

Kim’s story is an account of how the law fails to properly protect and care for victims of sex crimes, which are becoming increasingly more common online, while individuals are left to endure the crime without knowing when it will end.

“I saw you on Tumblr”

It started with a text message on Nov. 28, asking Kim for private English tutoring.

At first, she didn’t give much thought to it as she had given private lessons to some students outside of her job as a teacher at a hagwon (an after school academy) for middle and high school students. She hadn’t put up any advertisements, but responded asking the person’s age and gender. When he replied that he was a 24-year-old male, she politely declined.

“I reached out after I saw you on Tumblr,” the man responded. At the time, she didn’t know what Tumblr was, so she did not give it a second thought. She blocked him and thought that was the end of their interaction. A couple of weeks later, on Dec. 10, she got a message on the messaging app KakaoTalk, saying “Hello. I saw you on Tumblr.” That was when she realized that something strange was happening so she decided to go to Tumblr herself to investigate. What she saw there has been tormenting her each and every day since.

“I saw an account made using my name, and all of my personal information - my name, age, where I work, where I live, where my parents live, my phone number, my license plate number, a selfie I had taken and even a picture of my car and house. The posts looked like I had written them myself. They said, ‘I want to chat and meet,’ and ‘Please watch me in my house from afar.’”

Two days later, she heard from her ex-boyfriend, with whom she had recently broken up after a nearly three-year relationship. He confessed that it was indeed him that had created and posted pictures of her on Tumblr. She recorded the conversation on her phone, during which he admitted that “there were only photos on Tumblr” and alluded to similar content on other websites. She decided to believe him when he kneeled down in tears, asking her for forgiveness and giving his word that he would delete everything. 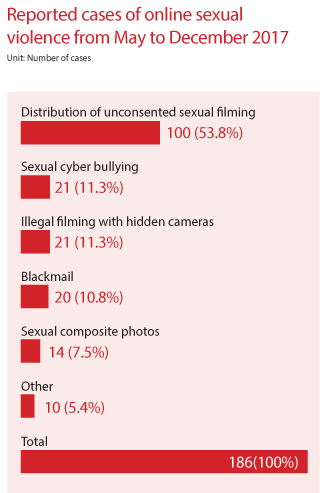 A week later, on Dec. 21, her ex-boyfriend sent her a text message in the middle of the night from her ex-boyfriend. Sensing that something was wrong, she went back to the internet only to find the same picture of herself smiling, with the addition of a new picture: the naked bottom of a random person, but made to look like she had shot it herself.

Her humiliation turned into anger when she saw a detailed description of her parent’s house. That’s when she decided to take matters seriously and went to a police station in Daejeon.

“The first time I went to the police, the officer sent me back home,” recollected Kim. “He told me that I needed to gather more evidence like screen captures of the posts and pictures, because apparently voice records of his confession and text messages threatening me weren’t enough to make a case. He said that even if he was sent to court, the judge won’t see them as valuable evidence.”

Three days later, out of the blue, she received messages from Instagram, Twitter, Facebook and Naver requesting verification in order to set up an account. This time, she called the Gangnam police station southern Seoul, when she was advised to “file at a station near her residence.” When she did go to a police station near her residence on Dec. 29, she was sent back yet again because “the screen captures need to be printed in color, not black and white.”

The third and final time she visited the police on Jan. 3, with everything printed out clearly and in color, she was sent home for a new reason - the officer had seen two similar cases in the past, but none of the aggressors had been punished. “My picture still comes up with all my information if you type my name into Google, but none of that is enough to get him punished,” said Kim, tearing up.

What’s worse is that it may actually be Kim who ends up getting sued. Angered by all the harassment by her ex, Kim wrote down everything he did, with his name and the name of his company and posted it online in January, although she deleted the post a day later. Her ex is now threatening that if she goes forward with anything, his company will sue her for libel.

Although Kim had almost given up, she is willing to keep fighting with the help of the Korea Cyber Sexual Violence Response Center (Kcsvrc). “We will begin with finding an attorney,” said Hyo-rin, a member of the response center who was present during the interview. “It’s hard getting someone to defend her, because we may be sued by the [ex-boyfriend’s] company. He ruined her life, but she’s the one in danger.”

According to a survey conducted by the Ministry of Gender Equality and Family in 2016, only 1.9 percent of sexual crimes are reported to the police, and only half of those cases end up in convictions. While it’s hard to get the aggressor to the court, it’s even harder to get police to listen to the victims.

“Although it’s not said out loud, it’s well-known that police don’t like their hands on cyber sexual violence cases because it’s hard to catch the suspect and requires a lot of effort. But also, it doesn’t help them get a promotion since it’s not considered a major criminal case. The cases get belittled, or even rejected, and all these victims are left unprotected from continuous damage they receive,” said the Kcsvrc counselor.

The Moon Jae-in administration announced that it will put together a cyber sexual violence team within the police force on Jan. 25, but as of February, no further measures have been taken.

Among the many reasons for the current legal stasis is that there is no law to properly cover these emerging forms of sexual violence that only happen online.

The current sex crime law does not regard online sexual violence as something legitimate and victims can only press libel or appropriation of personal information charges.

“The definitions of cyber bullying and cyber sexual crimes are very broad, and currently no law covers all of the damage that can be done to the victims,” explained the counselor. “In this case, she can only file for libel, stalking or blackmail. But none of these will get him jail time, as these charges usually end up with just a fine, and none of these are the crime that he committed.”

There are too many loopholes in the current law, according to the response center, and limitations when it comes to tracking down cyber criminals. “We can’t catch anyone if they’re on Tumblr, because it’s a foreign website and its managers don’t co-operate with international criminal investigations.”

The “2017 Statistics on Kcsvrc’s Crime Support” report by the response center published in January urges the government to take action on what needs to be done.

“In 2017, the idea of cyber digital sexual violence surfaced, thanks to the active participation of feminists online,” wrote the center.

“The government answered to the needs of the era by coming up with some measures, but the solutions proposed by the government were focused on punishing the aggressors and deleting the illegally distributed materials.

“What should not be forgotten is that while such measures are important to overcoming the damages inflicted on the victims of cyber sexual violence, they are only countermeasures to the damage already done. A fundamental discussion on the essence of how new types of sexual violence taking place online can be prevented must take place.”