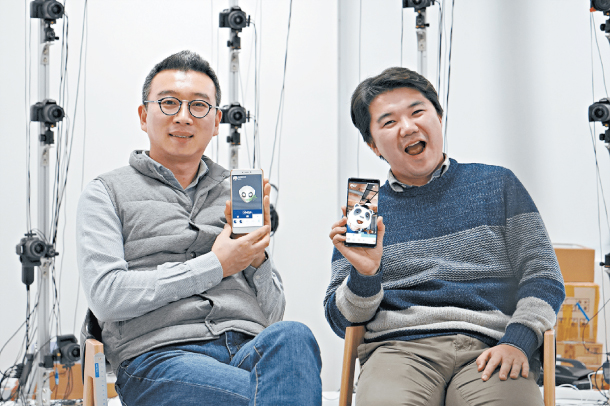 Enter the studio of Reality Reflection in Seongsu-dong, eastern Seoul, and you are surrounded by a web of 160 DSLR cameras stretching from floor to ceiling. The cameras can scan the body and face of a person and generate three-dimensional virtual images using the company’s patented technology. The studio can create a 3-D avatar of yourself or other virtual characters that are far more realistic than those generated by conventional computer graphic software.

The company was founded in 2015 by Roh Jung-seok, a serial entrepreneur, and Son Woo-ram, a 3-D imaging expert. Both bet on virtual reality becoming the next big technological phenomenon.

Roh, 42, is the chief strategy officer, and Son, 33, is chief executive, a rare combination in age-conscious corporate Korea. The duo has recently been developing an augmented reality game called Mossland and raising funds to continue development of the title through an initial coin offering (ICO), the cryptocurrency equivalent of an initial public offering on the stock market.

On Jan. 29, the start-up successfully sold 25 million of its own Mosscoins in a pre-ICO that ended in less than 40 minutes. About 10 percent of the buyers were from outside Korea, and Roh hopes that number will rise when the main sale begins on March 12 at 1 p.m. UTC (10 p.m. Korea time). The company plans to run the ICO for four weeks, in total selling 500 million Mosscoins.

“Korea is a hotbed for blockchain, and the world is watching the country,” he said.

In an interview with the Korea JoongAng Daily 10 days after the pre-ICO, Roh and Son expressed optimism about the future of blockchain and cryptocurrencies, especially seeing the young demographic that participated in the sale. They called them the “crypto bourgeois.”

“The fact that the younger generation is believing in blockchain and cryptocurrencies means that a future centered around these platforms will be realized,” Roh said. “It is not okay to judge things only with what you - the older generation with little knowledge of these technologies and those who have chosen not to step into the new domain - know.”

In Mossland, players will be able to buy and sell virtual property using a currency called Moss. They will be able to decorate their space with purchasable accessories, add characters and create visitors. The pair said they were inspired to use “moss” as the basis of their augmented reality game - a sort of mix between Monopoly and Sim City - because of moss’ real-life potential in recreating the environmental conditions necessary for life on Mars, a process that scientists have called terraforming.

“Playing the game, you may own the building you cannot in real life and gain virtual social status,” Son said. “You will feel less lonely in the virtual world.”

Mossland will start with well-known streets in Seongsu-dong and Gangnam District in southern Seoul.

“Any buildings you see in daily life can be landmarks in the game,” Son said. “Which building to make as landmarks will depend on users’ demand - they could even be the Eiffel Tower or Trump Tower.”

Currently, Reality Reflection’s revenue mostly comes from its 3-D studio and technology. The company has gained recognition through word of mouth, especially in Asia. A number of K-pop bands and television celebrities have visited Reality Reflection’s studio to shoot VR videos. Over the course of the past three years, the company, which started with four staff members including Son and Roh, has grown to 20 people.

Below are excerpts from an interview with Son and Roh.

Q. How did you feel after the pre-ICO for Mossland?

A. Son: We could see how passionate people were about blockchain and cryptocurrencies. With etherium, all the transactions are made public in real time, guaranteeing transparency and meaning we can watch investor activity with the pre-ICO live.

Roh: I didn’t expect the ICO would work out so well. I could definitely realize that the world has changed. The world has gained a new form of asset in which youngsters - millennials, to be more precise - can confide in instead of real estate, stocks and cash, the types of assets that belong to the older generation. We have a new investor bracket: cryptocurrency investors. They have a different notion of ICOs than the older generation.

We invited investors for a private meetup on Mossland before the pre-ICO. They were mostly young cryptocurrency rich - a new generation of wealthy people. They asked highly sophisticated questions and even made points about technical and legal issues that we could refer to. None of them asked questions pertinent to speculation. I became hopeful and optimistic about the future of blockchain and cryptocurrencies because the older generation still doesn’t think of cryptocurrency as money. They tend to view blockchain through pessimistic and prejudiced spectacles.

Do you think they were born rich or became rich by investing in cryptocurrencies?

Roh: I would call them “emerging cryptocurrency bourgeois,” similar in context to the tech elite in Silicon Valley and elsewhere. The attendees of the meetup were mostly in their 20s, either attending college or having just started working. Despite owning assets of 1 billion to 10 billion won, they didn’t look that wealthy in appearance. Not many of them even own a car.

Do you think it is too early to judge whether cryptocurrencies are good or bad?

Roh: I definitely think their underlying intentions are right, but no one can guarantee they are used in a virtuous manner. During the dot-com bubble, there were all sorts jumping on the bandwagon of start-ups. But as the bubble gradually bursts, which is happening now, only quality projects will survive after bad ones die away.

ICOs have an odd position regulation-wise.

Roh: Korea is currently regulation-free, which means those organizations administering ICOs should be strict about themselves. My company is trying to set a good example. Especially after watching the hearing, I think the older generation should respect the passion of the younger generation and protect them.

[Roh was referring to a U.S. Senate Banking Committee hearing on Feb. 26 where Jay Clayton, chairman of the Securities and Exchange Commission, and Christopher Giancarlo, chairman of the Commodity Futures Trading Commission, testified. During the hearing, Giancarlo said, “It strikes me that we owe it to this generation to respect their enthusiasm about virtual currencies with a thoughtful and balanced response, not a dismissive one.”

Financial authorities in Korea banned ICOs last September but has yet to crack down on them yet. Reality Reflection avoided legal dispute by setting up the company in Estonia, and many other start-ups trying to raise funds through ICOs have opted to launch operations in such regulation-free countries.]

Roh: I know for a fact that all the big-name companies are preparing to launch ICOs - not only Naver, Line and Kakao but also leading start-ups and game developers - for various purposes around March and April. We rushed to launch the ICO earlier than others, but frankly there were merely two ICOs out of nearly 10 in Korea that were led by quality players so far. Most of the others ended up being pyramid schemes or scams. The messaging app Telegram is raising hefty funds in a private ICO [that closed at the end of February] from institutional investors, which indicates coins are being acknowledged for their value.

What do you think of the market prospects for virtual reality?

Son: When we were brainstorming on what to do with VR in the fall of 2015, it seemed like a far-off future, but we betted on the potential of VR and our capabilities. The VR boom caught fire in the United States in 2016, and there are still limitations for the general public to approach VR headsets due to their physical limitations and price barrier, but the situation will get much better this year. The VR headset market has been dominated by two players - HTC and Oculus - but we expect Microsoft’s mixed-reality headsets to lead the market this year.

Roh: After the first iPhone was released in 2007, it took two years for the product to be acknowledged as mainstream. Sales of VR devices are incremental and they will ultimately reach the virtual circle. It is inevitable that suspicions fill the market until then. I think we are in the middle of a silent period before an explosion. It is certain that VR will get bigger, which Hollywood and the content industry also firmly believe.

What do you think of the future of bitcoin and other cryptocurrencies?

Roh: There are mixed predictions about bitcoin. Some even say it is doomed already. But the future to be brought by blockchain technologies and the price of bitcoin are not relevant at all. Whereas bitcoin prices rely purely on speculative demand and supply, which makes forecasting their future difficult, blockchain has an enormous ripple effect since it can penetrate into numerous systems regardless of whether they are games or financial transactions. I think bitcoin and blockchain are separate issues and blockchain will expand irrespective of bitcoin prices.

Kim Jin-hwa, co-head of the Korea Blockchain Association and co-founder of Korea’s oldest bitcoin exchange, Korbit, has assumed the post of adviser to the Mossland ICO. Is there a reason?

Roh: Confidence matters a lot for ICOs given there are so many bizarre projects out there. But people began chancing on ICOs last October, and most of the top players in the tech sector are expected to come out with ICOs starting in March. The landscape of the ICO market will look pretty much different by the end of this year, too. 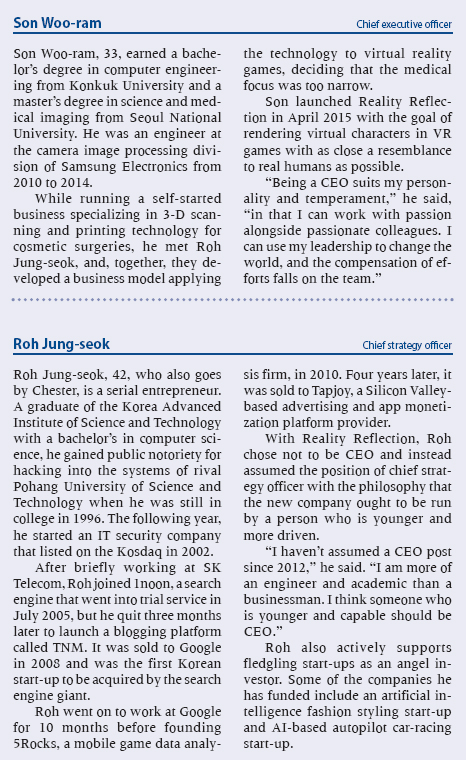