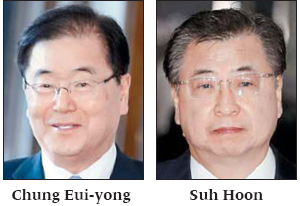 A 10-member delegation of South Korean officials led by Chung Eui-yong, head of the National Security Office in the Blue House, will visit North Korea today and tomorrow to discuss improvement of South-North relations and the “preconditions for a North Korea-U.S. dialogue aimed at the denuclearization of the Korean Peninsula,” Yoon Young-chan, President Moon Jae-in’s senior press secretary, announced Sunday.

The group will fly into the North this afternoon and stay for two days. Upon their return, they will brief local authorities, after which Chung and Suh will visit the United States to brief officials there, though a specific timeline wasn’t mentioned for the second trip.

The North Korea visit will also be “closely consulted” with China and Japan, Yoon said, adding that South Korea’s sending of the special envoys is a reciprocation for the visit of Kim Yo-Jong, North Korean leader Kim Jong-un’s younger sister, to the PyeongChang Winter Olympics opening ceremony last month. She relayed an invitation to Moon from her brother for a summit in Pyongyang.

At the time, Moon responded that the Koreas should “create an environment” for the summit to be held.

A high-level official from the Blue House who spoke on the condition of anonymity said Sunday that it hadn’t been decided yet who the envoys will meet in Pyongyang, but said “results that correspond” to Kim Yo-jong’s meeting with Moon were expected, hinting at a possible interaction with the North Korean leader.

The official said Suh and Chung will “definitely” meet Chung’s U.S. counterpart H. R. McMaster when they visit Washington, though a meeting with President Donald Trump hasn’t been confirmed.

The North Korea visit marks Seoul’s latest effort to broker a meeting between Washington and Pyongyang, as both sides basically agree to dialogue but the Trump White House refuses to enter any talks without the regime’s promise to denuclearize.

Last Saturday, an unidentified spokesperson for North Korea’s Foreign Affairs Ministry rebuffed any preconditions for talks with the United States, saying through the state-run Korean Central News Agency (KCNA) that the North will “neither beg for dialogue nor evade the military option claimed by the U.S.”

“The dialogue we desire is the one designed to discuss and resolve the issues of mutual concern on an equal footing between states,” read an English version of the report.

“In decades-long history of the DPRK-U.S. talks, there had been no case at all where we sat with the U.S. on any precondition,” the report continued, using the acronym of North Korea’s official name, the Democratic People’s Republic of Korea.

Whether or not the “vicious cycle of confrontation” continues between Pyongyang and Washington solely relies on the attitude of the United States, the spokesperson stressed.

Seoul and Washington are expected to resume their postponed military exercises in early April, leaving the Moon administration a month-long window to bring the North and the United States to the discussion table, as Pyongyang sees the drills as a rehearsal for an invasion.

When South Korean authorities told North Korea’s recent high-level delegation to the Olympics closing ceremony that Seoul and Washington will resume the drills after the Paralympics end on March 18, the officials from Pyongyang responded they “cannot accept” the exercises and warned of a backlash.

In another KCNA report last Saturday, the North called the joint drills a “threat” aimed at pre-emptively attacking the North with nuclear weapons and a reason why it was “compelled” to possess a nuclear deterrent.

“As we have stated on numerous occasions,” the second KCNA report read in English, “we will consider any type of blockade as an act of war against us, and if the U.S. has indeed the guts to confront us in any ‘rough’ manner, we will not bother to respond to it.”

The last time a South Korean president sent a special envoy to North Korea to discuss an inter-Korean summit was in 2007, when then left-leaning President Roh Moo-hyun sent NIS Director Kim Man-bok, paving the way for the second inter-Korean summit later that year.

Roh’s conservative successors Lee Myung-bak and Park Geun-hye weighed the option of a third inter-Korean summit during their presidencies, but never followed through.

In a country where Kim Jong-un holds ultimate authority on all major decisions, local analysts say that the special envoys will especially have to check the leader’s opinion about Moon’s denuclearization road map, which he personally relayed to the North Korean delegation last week.

A senior Blue House official said Moon admitted that North Korea’s denuclearization would be a “long process” when he met with Kim Yong-chol, head of the delegation and a vice chairman of the North’s Central Committee within the Workers’ Party, but rolled out “various proposals to enter the process.”

The Blue House source did not specify what those proposals were, but Moon has long publicly endorsed what he calls a two-step denuclearization road map. In the first step, the North must place a moratorium on nuclear and missile tests, freeze any further development of the technologies and join denuclearization negotiations. In return, the international community would offer corresponding compensation. The second step would be actual nuclear dismantlement.

“At times when North and South Korea were on a serious military standoff and had built no trust between each other,” said a South Korean government official, “the chief executives’ opinions used to hold the ultimate say on resolving various issues.

“The role of a special envoy,” the official continued, “has always been critical to all [South Korean] administrations in directly exchanging the opinions of the chief executives.” Suh, the NIS director who will visit the North today, is known to have the richest experience of South-North relations in South Korea’s spy agency, gained over the past decades interacting with Pyongyang officials through various back channels and handling practical work for the previous inter-Korean summits in 2000 and 2007.

While Suh will likely test the waters for a third inter-Korean summit this year, Chung, head of the National Security Office in the Blue House who will lead the delegation, is positioned to best represent Washington’s stance to the North Korean leadership, analysts here say, due to his deep ties with Trump’s National Security Advisor McMaster. According to Blue House sources, the two are so close that they call each other nearly every day to exchange the latest security updates.