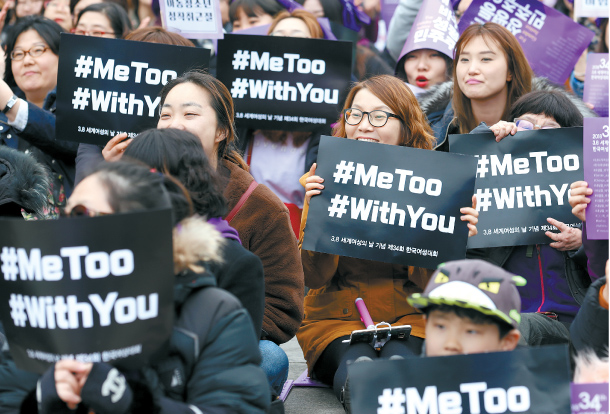 The Me Too movement in Korea has spread from the prosecutors’ office and judiciary to the entertainment industry, academia and clergy, leading to mass mobilizations of activists holding rallies.

The theater has been hit especially hard with accusations against influential men, including theatrical directors Lee Youn-taek and Oh Tae-seok and actors Jo Min-ki, Oh Dal-su and Cho Jae-hyun.

Some 150 members of the theatrical community kicked off the “Theater With You” movement on Feb. 22 to protest sexual misconduct and demand change.

Seven key members of the movement, including actors, playwrights and directors, sat down with the JoongAng Ilbo on Friday at the Samilro Changgo Theater in central Seoul to share their viewpoints on sexual misconduct in the theater and where Korea’s Me Too campaign is heading.

When asked if sexual misconduct in the theater was widely known before the Me Too movement, Seol Yu-jin, a writer, said, “Even before the recent Me Too movement, there were rumors of [actor] Lee Myung-haeng and Lee Youn-taek, so I’ve known about it. The fact that I brushed it off because I was not a victim is something I feel wretched and sorry about now, as a member of the theater circle.”

She added that the Theater With You movement is receiving reports from victims on a daily basis through a call center.

Bang Hye-young, the head of a theater troupe, shared her experience in 2005 working as a junior staffer and being dragged off by a producer to a motel after having drinks.

Bang said when she resisted, the producer told her, “If you are like this, working at the theater will become difficult,” and tried to coerce her by saying, “Didn’t you say you want to be in the theater? How are you going to write well if you don’t have experience with men?”

She said she left the troupe but was told by people later, “So you didn’t sleep with him - why are you making such a fuss?”

Bang added, “I couldn’t stay silent thinking that there are so many victims who face self-censorship.”

“People in the theater are repenting for not doing anything until now,” said Jeong An-na, a director. “Personally, I knew about Lee Youn-taek for a long time, since 1997. Since then, he proposed to work together, but I didn’t accept it.”

Jeong said her own views on the issue crystallized when former actress Kim Soo-hee, who heads a Seoul-based theater group, raised sexual assault allegations against Lee, the prominent playwright and theatrical director, recently.

“I asked myself, why didn’t I go along with him then? That is when I realized that I, too, was remaining silent even though I knew the sordid
face of theater.”

“The most common excuse used by assailants is, ‘We were lovers.’ It’s almost like a manual because the same words are repeated over and over again,” said Oh Seong-hwa, a promoter.

“They only say things that can help them escape legal trouble. And they try to make the victim look like a promiscuous person, saying, ‘I thought we had good feelings, and it was a misunderstanding.’”

Kim Bo-eun, an actor, warned, “Victims who are taking part in the Me Too movement should not be described as problematic,” pointing out there are already articles and posts on social media trying to protect the assailants.

Hong Ye-won, an actor, said, “Theater is a place that cannot help but be vulnerable to sexual misconduct. From beginning to the end, you are trapped in a confining pyramid of hierarchy.”

The Me Too movement has received endorsement by President Moon Jae-in, who on Sunday reiterated his support as he pledged to eliminate sexual misconduct and gender-based discrimination.

“Recently, our society, along with the Me Too movement, is in the midst of a crucial change,” Moon said in a congratulatory message for a ceremony commemorating the March 8 International Women’s Day in central Seoul.

“The Me Too movement is leading Korea toward becoming a society in which sexual equality and women’s rights are realized and the dignity of all people is respected.”

He also “expressed respect for the victims who were able to speak of experiences they had buried deep in their hearts in fear of facing disadvantages and retaliation.”

Hundreds of people gathered at the 34th Korean Women’s Conference led by the Korean Women’s Associations United in Gwanghwamun Square, central Seoul Sunday ahead of International Women’s Day on Thursday, calling for a democracy with gender equality.

The activists, which included members of civic organizations and academics, marched with pickets reading “Me Too” and “With You.”

Jennifer Piscopo, a political science professor at Occidental College in Los Angeles, who is in Seoul to speak at the National Assembly Tuesday, took part in the march.

“Women are also saying it’s not enough to say that it is happening, but that people have to change their behavior,” she told the Korea JoongAng Daily about the global Me Too movement. “I hope that in addition to identifying abusers, we take the next step to say what it will require to make it stop.”

She advised, “Don’t stop talking about it. Keeping the momentum is so important. In the U.S., everyone thought Me Too would disappear after two or three months. The fact that it is still present means that people can’t stop paying attention.”

Mark Ancliff, a physics professor from Paju, also joined in the women’s march with his wife, who is an organizing activist. Their young son and daughter accompanied them.

“Although it’s a women’s day event, it’s important that all families take part to make a better society for women ? that is beneficial for everybody,” Ancliff said.

Kim Yu-jeong, a 47-year-old woman from Ilsan, held up a sign that read, “We are the same women,” and showed her support for the rights of female migrants.

“I’m marching also to raise awareness for female migrants, who don’t have the opportunity to voice their situation because they are often disadvantaged in society,” said Kim.

“And their cases are also similar to those women who work in restaurants, in markets, who are in positions where they aren’t able to speak up against their bosses.”