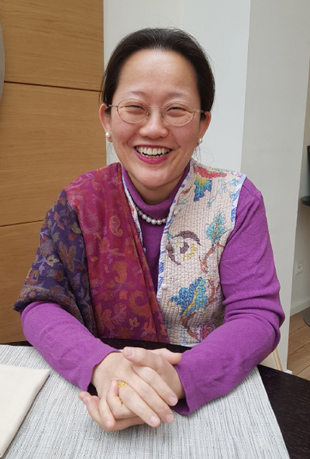 Kang Min-whee, who has worked on health and welfare issues for children and mothers in dangerous areas like Afghanistan, has become the first Korean female director at the United Nations’ World Health Organization (WHO) in Switzerland.

Kang, who received an undergraduate degree in French literature at Ewha Women’s University and went on to study at the Ecole Superieure d’Interpretes et de Traducteurs in Paris, was selected by the Korean Foreign Ministry’s junior professional officer (JPO) program in 1998, which enabled her to work at international organizations.

Since then, she has served over 20 years in seven UN international organizations in countries including Afghanistan, Jordan, East Timor, Gambia, Indonesia and India, to aid and protect children during times of civil war and outbreaks of diseases.

Former WHO Director General Lee Jong-wook once advised “young people should head to the field,” and Kang took that to heart and has spent most of her time out in the field. Lee served as the first Korean director general at the WHO from 2003 until he died in 2006.

Kang recollects that Lee, during her days as a junior professional officer, bought her lunch and encouraged her to pursue her dreams.

In 2014, Kang was working for Unicef’s office in Amman, Jordan, and planned to be transferred to Syria next, but ended up becoming head of Unicef’s central region field office in Kabul instead.

Kang took part in relief activities, putting her life on the line. UN workers were being attacked by insurgents.

During this time, she sought out children who lived in mountainous regions 3,000 meters above sea level in efforts to vaccinate them and send them to school. When humanitarian workers headed to remote areas, they had to travel in armored vehicles.

One time, a bomb exploded a mere 50 meters in front of her. To reach the most mountainous regions, workers had to use helicopters, despite the threat of a mortar attack.

But when asked if she had been frightened, Kang replied, “In the past 20 years, I was the happiest while in Afghanistan.”

She continued, “An Afghan religious leader once told me, ‘Every year, we’ve held funerals for mothers and children who died, but because of your efforts [such as vaccination], there aren’t such cases these days.’”

Afghanistan is a large recipient of Korea’s foreign aid, and Kang said, “We conducted mother and child health services using Korean money, and I felt proud when we received thanks for this. When you do relief activities in countries like this, you can see the results right away. When you report back to the donor country, they get excited and donate more.”

In Feb. 2010, as a Unicef country representative in Gambia, Kang was declared persona non grata and expelled from the West African country because of her reporting of children’s rights violations and child labor issues to the United Nations.

She began her career at the International Labour Organization’s (ILO) regional office for Asia and the Pacific in 1998 and also worked for the United Nations Development Programme (UNDP). In 2003, Kang beat hundreds of other contenders to become an employee at Unicef and served at the organization until last year.

Kang initially dreamed of becoming a poet. But she pointed out, “While I was not able to achieve that dream, my life right now is so happy and meaningful. Korea is a foreign aid donor country. I hope young Koreans can head out to the world to be of help to countries with different development experiences than our own.”