Having played in four different leagues throughout her career, Kim Yeon-koung is about to dominate the Chinese Volleyball League. 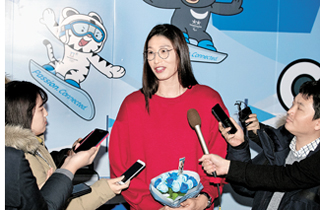 During Shanghai’s semifinal playoffs against Jiangsu at Luwan Stadium on Saturday, Kim scored 26 points, the most among the two teams, to lead Shanghai to the final.

With Kim’s scoring streak, Shanghai won the match 3-2 and defeated Jiangsu in the semifinals in a best-of-five format, with a record of three wins and a loss.

Starting on Mar. 13, Shanghai will now compete for the championship trophy against Tianjin. The championship match will be in a best-of-seven format. If Shanghai wins, Kim will become the first volleyball player, male or female, to win in four different leagues.

Not only that, the team’s championship victory makes Kim the most likely candidate to win the MVP award.

This season, Kim scored 432 points, ranking fifth in the league and dominantly first in the team. Shanghai benefitted significantly with the addition of Kim, as they were ranked sixth last season.

If Shanghai wins the championship, it’ll be their first-ever victory since the team joined the league in 2000-01 season.

“We try to enjoy the matches,” Kim said. “We’ll prepare well in the remaining time and hope to see good results.”

Kim started her volleyball career with the Cheonan Heungkuk Life Pink Spiders in 2005 and played until the 2009 season.

Kim then left to play in the Japanese league, with JT Marvelous, for two seasons and then played six seasons for Fenerbahce of the Turkish league.

Kim won the MVP award several times while playing in the Turkish league and has become the highest paid volleyball player in the world. Through WorldofVolley, it was reported that Kim’s salary is estimated at 1.2 million euros ($1.36 million).

Moving to the Chinese league has allowed Kim to have a more flexible schedule, but in the short term, it means that she’ll have less competition and a lower salary.

After the Rio Olympics, Kim struggled to continue her season in the Turkish League, as she was worn out and suffering from an injury, but she still managed to get her former team, Fenerbahce, to the top of the Turkish league.

The women’s teams in the Chinese Volleyball League are considered a semi-professional league.

The league is still new when it comes to signing foreign players. However, Shanghai has been treating Kim very well, providing her an apartment, personal vehicle and a translator.

“Normally, a club is allowed to have two foreign players,” she said, “but Shanghai only added me and is supporting me the best they could.”

Thanks to her easy-going personality, she has become the biggest volleyball star in China, with fans screaming Kim’s name and waiting after games for her autograph.

While seen as a “big sister” by domestic fans, her aggressive plays and spikes have earned her the nickname “Big Brother” among Chinese fans.