SK’s Kim, and his long, flowing locks, return to the mound

SK’s Kim, and his long, flowing locks, return to the mound 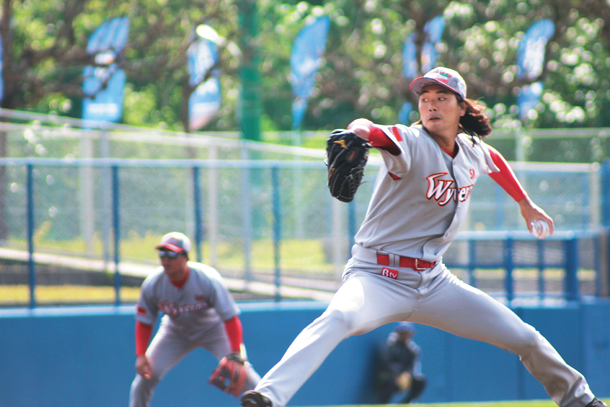 The SK Wyverns’ left-handed pitcher Kim Kwang-hyun will make his long-awaited return to the KBO later this month. Though his pitching style is unchanged, fans may struggle to spot the fireballer on the mound due to his new shoulder-length hair.

Kim, currently training in Japan, started for the Wyverns in a friendly game against the Yokohama DeNA BayStars of Nippon Professional Baseball on Feb. 28. It was Kim’s first appearance in more than a year, since he had surgery on his elbow, but it was satisfactory - he pitched two scoreless innings. Pitching at the highest speed of 152 kilometers per hour (94 miles per hour) with an average speed of 148 kilometers per hour, Kim had four strikeouts throwing three sliders and a fastball.

Despite returning from surgery, there were no noticeable changes in Kim’s form - just his hair. Since leaving for Japan to attend a rookie training camp in November, he hasn’t had a haircut. It is now long enough for him to tie in a ponytail or wear a headband.

In Jan. 2017, Kim underwent surgery on his left elbow while the rest of the team left for spring camp. Kim could have avoided missing the entire season by consistently getting treatment, but decided to bide his time after learning that he may be able to make a full recovery after surgery. He missed the entire season but still received 900 million won ($828,000).

“I tried not to watch the games,” Kim said to reporters in May. “The more I watch, the more I want to play, so I tried to be careful.”

As he was solely focusing on rehabilitation and recovering, Kim had no time to think about his hairstyle.

“I plan on getting a haircut after my first game,” Kim said in December. “I still have four months.”

Since then, Kim’s hair has become a symbol of his motivation to get back on the mound. And chances are his short hair will soon be making a return. If Kim’s performance at spring training is anything to go by, it won’t be long before his first game of the season.

“More than anything, I’m satisfied that I don’t have any pain after pitching,” Kim said. “I don’t care much about the speed of the pitch. I’ll be at a level similar to today throughout the season. I’ll still need some time to get used to playing in games.”

Kim’s goal is to pick up ten wins this season, something he has achieved seven times since his debut in 2007. While playing in 27 games during the 2016 season, Kim picked up 11 wins and eight losses with a 3.88 ERA.

Wyverns’ manager Trey Hillman also plans on having Kim as a starting pitcher, although Hillman mentioned that the number of games and the innings will be limited so he can condition himself throughout the season.

“I heard that [our manager] Hillman grows his hair to donate it to children suffering from cancer,” Kim said. “I decided to join him.”

Since there are certain requirements when donating hair - it needs to be 25 centimeters (9.8 inches) or longer and can’t be dyed or permed - Kim has made sure to take good care of his hair.

However, some of the Wyverns’ coaching staff think that Kim may keep on growing his hair, possibly fearing a jinx.

“Athletes are sensitive about a jinx,” said a Wyverns coach. “If Kim Kwang-hyun picks up a win in his first game, he might keep on growing his hair longer.”