The other nuclear option

The other nuclear option 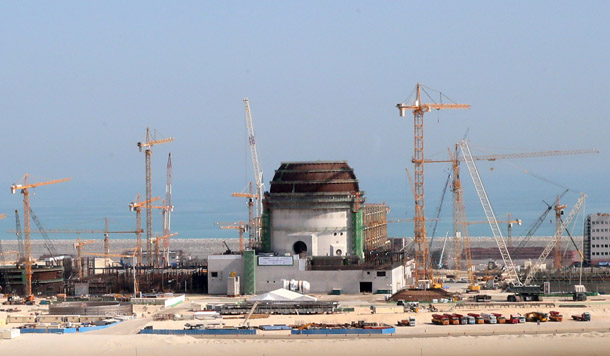 The first reactor was installed at a nuclear power plant in Baraka, near Abu Dhabi, United Arab Emirates, on May 20, 2014. [YONHAP]

Hwang Il-soon is a professor of nuclear engineering and design at Seoul National University. He is a nuclear scientist devoted to ensuring the safe functioning of 450 commercial reactors across the world, serving as the chair of the International Atomic Energy Agency’s technical working group on nuclear instrumentation and control.

As with human life expectancy, the average life of nuclear reactors has also got longer, stretching from 40 to 60 years thanks to scientific advances. But, in Korea, the life of a reactor has been capped at 40 years under the government’s plan to wean out nuclear fuel. The 64-year-old scientist is worried about the Korean economy’s future after the collapse of the nuclear reactor industry.

The traditional industrial strengths — shipping, shipbuilding, steel, chemical, construction, automobile, and semiconductors — that buttressed Korea as an export powerhouse have lost their past glory. Korean shipping is no longer globally competitive following the collapse of Hanjin Shipping. Shipyards are scorned as elephantine money losers by the Moon Jae-in administration. Steel has fallen victim to U.S. trade protectionism by U.S. President Donald Trump. The automobile front is shaky with General Motors poised to close down the Gunsan plant. The semiconductor industry, which has maintained the dignity of Korean Inc., is losing ground to Chinese producers.

Hwang said he has seen a lot while traveling many countries. It does not take long for a country to run out of foreign currency and public money. Koreans could find themselves in the position of the Greeks and Venezuelans, he added.

Hwang moved out of the lab to act after witnessing how a scientist helped turn the fortunes of the crisis-hit U.S. economy through the shale gas revolution. He decided to explore the overseas market for Korean reactor technology. Korea, with no natural resources and a small market, must make money through exports. Nuclear fuel is energy dug out of the human brain. He believes energy exports will not only make Korea rich but also ensure quality jobs and a robust supply chain.

He formed a civilian alliance with universities, industry, religious, labor, youth, environmental, and women’s rights groups to promote reactor exports. He was not happy with the government’s phase-out policy, but nevertheless was comforted by its promise to promote exports.

The alliance will hold a cultural event to pitch its campaign in Gwanghwamun, central Seoul, on April 21. He envisions the event could draw broader public support for the campaign to save the nuclear reactor industry and promote it as mainstay exports.

His approach is refreshing as street rallies in Korea have been devoted to political mudslinging or interest-group gains. Gatherings on nuclear energy have mostly been anti-nuclear. But the civilian action group wants to highlight the bright side of nuclear reactors. The group will be a civilian army for Paik Un-gyu, who has vowed to pitch for additional reactors in the United Arab Emirates (UAE). The UAE awarded Korea its first commercial nuclear project in 2009.

The civilian action group also had a radical suggestion for President Moon, who has been invited by North Korea for a summit meeting. In the talks, Moon could propose to Kim Jong-un that South Korea could help convert North Korean nuclear facilities into safe and economical sources of commercial fuel. South Korean atomic expert Lee Byung-ryung had persuaded North Korea to adopt South Korean light-water reactor designs over those of the United States and Soviet Union in the 1990s.