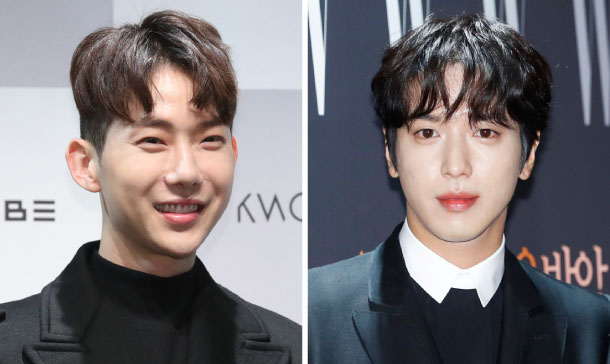 The Ministry of Education announced on Monday that they will demand Kyung Hee University’s graduate school rescind the admission of three students, including Jung Yong-hwa of boy band CNBlue, left, as well as the diploma of Jo Kwon of the vocal group 2AM, for violating school regulations.

Among the three students are Jung and a businessman identified only as Kim who were admitted to the school’s doctoral program, singer-songwriter Cho Kyu-man who was admitted to the master’s program, and singer Jo who received a master’s degree in performing arts.

The first three students were admitted without attending the mandatory interviews, while Jo obtained a degree without satisfying the standards to graduate.

The ministry found out that a professor who was involved in the case turned a blind eye to Jung and Cho’s absences in classes and gave them full points. For this, the professor, along with the other six professors involved, will receive disciplinary action from the ministry.

Meanwhile, Jung entered an army basic training camp in Hwacheon, Gangwon, on Monday to begin his mandatory duty. Jung kept his entrance a low-key affair without any events, to prevent crowds from forming near the base.