Kia Motors’ Stinger is named car of the year

Kia Motors’ Stinger is named car of the year

Kia Motors’ premium sports sedan Stinger was selected as the top model in this year’s Car of the Year (COTY)awards organized by the JoongAng Ilbo.

This is the first time in seven years that Kia Motors, Korea’s No. 2 carmaker by sales figures, was able to snatch the top spot in the annual automotive award.

The Stinger launched in May last year and is the first car to carry Kia Motors’ new premium lineup badge.

“The Stinger did not fall short of imported sports sedans that cost hundreds of millions of won,” said Kim Dong-ryun, a researcher at Kumho Tire. Kim was one of 15 judges who participated in this year’s COTY.

The Stinger stood out the most in the performance segments. Six out of 15 judges gave it full marks.

“Despite its heavy 2,175-kilogram (2.39-ton) weight, driving the S-Class felt light and cozy at the same time,” said Kim Jae-woo, head of 3Secondz, a data analytics start-up that focuses on driving performance, and also one of the judges. “The fact that it took only 4.8 seconds to reach 100 kilometers (62.1 miles) per hour was also impressive,” Kim added.

“If you take out the price factor, the S-Class stands at the top of the pack,” said Jang Jin-taek, head of Car Media and also a judge.

The Kona received 8.11 points in the SUV segment. The S-Class stood out in terms of luxury, safety and coziness, while the Kona won points for fuel efficiency and cost-effectiveness. 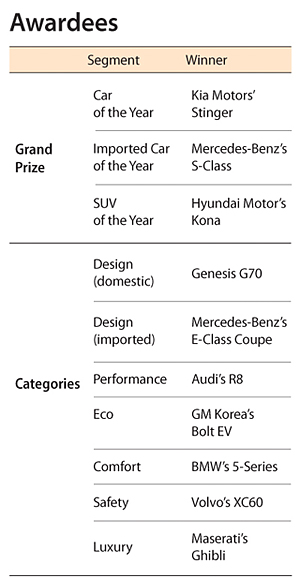 Aside from the top three prizes, the COTY acknowledged six more cars in various segments. The awards used to have ten more prizes, but downsized in order to give more meaning to each award.

COTY acknowledged the Genesis G70 and Mercedes-Benz’s E-Class Coupe in the design segment. Design is the only segment that crowns two models - one domestic and one imported - in an attempt to highlight the design elements of cars made in Korea.

The E-Class Coupe was praised for its elegant wheel design and the flowing lines of the window frames. It received 6.05 points.

“Compared to the Genesis’ previous model G80, the G70 was able to improve greatly in terms of interior design as well as material quality and color combination,” said Kim Tae-wan, the former head of GM Korea’s design center who now leads a consulting firm WaNeD.

Audi’s sports car R8 V10 Plus won in the performance segment with 6.91 points. The Stinger received 8.01 points but was excluded from the award since it had received the top prize.

Kim from 3Secondz said the cornering ability of the R8 V10 Plus was underwhelming but its horsepower was impressive, boasting 610 horsepower. The Genesis G70 received 6.37 points and BMW’s 5-Series received 6.07 points in the performance segment.

In the eco category, GM Korea’s fully electric Bolt EV ran away with the prize. Fourteen out of 15 judges picked the Bolt EV as the best model in the segment.

“The Bolt EV is able to drive 383 kilometers on a single charge. The Tesla’s Model S, which costs 115.7 million won, is only able to drive a similar range,” Heo Seung-jin, an automotive professor at Kookmin University, said.

“The Bolt EV is much lighter too,” he added.

In the comfort segment, which gauges ride quality, BMW’s 5 Series took the top spot with 6.30 points.

“When the car reaches its limit, the 5 Series stands out with its distinctive agility and safe driving features,” Kim from 3Secondz said.

This is the first time COTY has unveiled evaluation scores to enhance the credibility of the awards. The award ceremony takes place today at the Hotel Shilla.