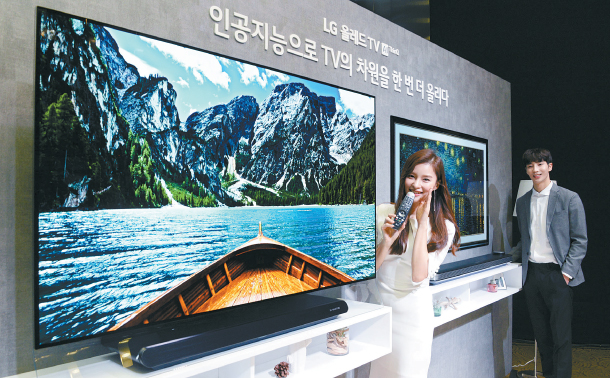 LG is determined to become the front-runner in the global premium TV market, beating its longtime rival Samsung Electronics as well as Sony with its new AI-enabled TVs.

According to LG, it is launching 10 OLED TVs this year, all featuring its AI platform, dubbed DeepThinQ. While eight models were released Monday, two TVs - the 55- and 65-inch B8 - are scheduled for launch in April.

The DeepThinQ platform enables users to control TVs with their voice, from switching channels and adjusting audio volume to searching for information on web portals like Google, Naver and YouTube and controlling TV-connected game consoles by speaking into what LG calls the magic remote control.

The controller looks the same as an ordinary TV remote, but has a mic that can deliver voice orders to the TV. The controller can also be used as a mouse to click on search results that appear on web portals.

LG has also embedded its own alpha 9 processor chip that can automatically adjust color definition and noise level of input videos in four stages based on AI technology.

“LG’s major goal is to let any consumer easily make 100 percent use of our TV’s features,” a spokesperson from LG said.

LG agreed that some of the features introduced are already available through smart speakers on the market. LG and mobile carrier LG U+ both already have smart speakers for sale.

“We only introduced the basic features of our AI TVs today, but we will be announcing some more upgraded services in partnership with third-party content and service developers later this year,” said Brian Kwon, president of LG’s home entertainment division.

According to Kwon, smart speakers are good bridges for consumers that need time before changing their existing TVs to AI-enabled models, but it is inevitable that AI systems will ultimately be built into premium TVs.

As part of LG’s efforts to expand the OLED TV market, it decided to slash roughly 20 percent off the hefty price tags this year. The price of the new OLED TVs range from 3 million won ($2,776) to 24 million won.

Rival Samsung is likely to come out with a similar AI-based strategy during its global TV launch event to be held in New York on Wednesday. The electronics giant is bracing to gain back its market share in the premium TV segment by upgrading its quantum-dot technology-based QLED TVs and applying its Bixby AI system to them.