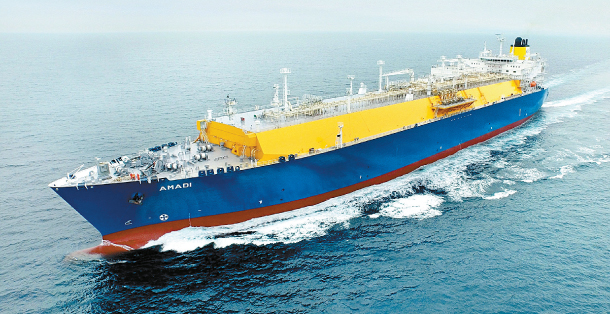 After two gloomy years with barely any orders, Korean shipbuilders have spent an upbeat week announcing new deals with shipping companies from all over the world.

Hyundai Heavy Industries Group announced on Monday that it clinched orders to build two LNG carriers from a European shipper, with the company and prices currently undisclosed. This is the latest in a string of deals inked last week, with Hyundai agreeing to orders for eight vessels totaling approximately $800 million.

This year alone, Hyundai has secured deals for 29 ships worth $2 billion, despite January typically being a sluggish month for ship orders.

Samsung Heavy Industries also announced a new deal on Monday. The shipbuilder confirmed a foreign shipping company has approved an order for one LNG ship with a capacity of 180,000 square meters. The deal will be closed on Friday, after which Samsung Heavy’s order record for the year will be 12 vessels, with the previous 11 deals worth around $1 billion.

Daewoo Shipbuilding & Marine Engineering (DSME) closed contracts on three consecutive days last week - a record in the company’s 40-year history. Between Tuesday and Thursday, it received orders to build seven ships worth around $800 million. The deals were even more meaningful in that the three shipping companies had never purchased ships from DSME before.

DSME has clinched orders for 10 ships in the last two months. The deals are worth $1.2 billion, which is already 40 percent of the $3 billion that the company raised last year.

Shipbuilders have been struggling for the last two to three years as orders dropped amid a slow global economy. The general consensus among industry insiders and analysts is that the market has passed its lowest point as the global economy is slowly reviving, pulling up cargo volume.

But the new orders won’t surface on performance results until around two years later, as payments for ships are only finalized once the vessels have been built and delivered, which takes at least one and a half years.

The shipping industry’s drive to go more eco-friendly is a major contributor to the spike in orders. Next year, the International Maritime Organization will make it obligatory for ships to install a device that cleans ballast water. Starting from 2020, the percentage of sulfur oxides in oil-based fuels will have to remain below 0.5 percent. The current limit is 3.5 percent.

“It’s a more economic choice to purchase a new ship instead of installing the necessary devices on a vessel over 15 years old,” said a Samsung Heavy spokesman.

The demand increase is seen as a rosy sign for Korean shipbuilders, who have built 63 percent of all LNG carriers operating worldwide.