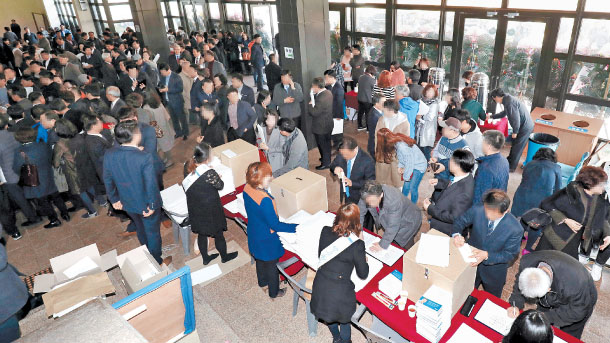 Participants queue up and pay for books at the book-signing event for Park Soo-hyun, former Blue House spokesperson and candidate for the governor of South Chungcheong, inside the gym at Dankook University’s Cheonan campus in South Chungcheong on Saturday. [KIM SUNG-TAE]

With just three months to go before local election, an increasing number of candidates are hosting book-signing events, which some public officials say are more or less a facade for candidates to actually collect campaign funds.

“How many books can you give me?” asks a customer at the front of a queue inside the gym at Dankook University’s Cheonan campus in South Chungcheong on Saturday, where the book-signing event for Park Soo-hyun, former Blue House spokesperson and candidate for South Chungcheong governor, was held.

“As much as you need,” says the volunteer who, without counting the cash handed over from the customer, slips it into the cash box on the table before handing over the books.

At the book-signing event for Seosan Mayor Lee Wan-seop at a cultural center Seosan, South Chungcheong, on Saturday, there were credit card readers ready at the tables for visitors to pay with credit cards.

Lee is running for re-election.

“We give them more books if we think the envelope is thick enough [with cash],” said a volunteer.

“It is not illegal to pay more than the book’s official price at these events,” said an aide of a lawmaker. “However much cash you hand over becomes the price for the books. I’ve seen cash amounting to hundreds of thousands of won to millions of won being handed over at these events.”

The Political Funds Act requires candidates to reveal how much campaign funding they were able to collect publicly and it bans them from receiving funds from organizations through public campaigns. But it has no directives on candidates hosting book-signing events.

The Improper Solicitation and Graft Act also bans candidates from receiving campaign funds worth more than 1 million won at a time and a total of 3 million won a year. But it does not count the money paid for books written by the candidate as campaign funds.

Yet the book-signing events have all the characteristics of a political campaign.

“I hope everyone here will come together as one,” Mayor Lee said in addressing some 600 people gathered at the center in Seosan on Saturday. “So that all will come to good fruition.”

Candidates often use vague language in speeches at these events, as it is illegal for a candidate to explicitly ask for electors’ support at a book-signing event.

Many of the attendees are politicians.

South Chungcheong Gov. An Hee-jung and candidates from the ruling Democratic Party (DP) running for South Chungcheong governor attended Park’s book-signing event on Saturday. The event was attended by thousands, according to organizers.

Oftentimes, it is the supporters of the politician who attend the events.

Many lined up at the queue holding cash placed inside envelopes, on which they wrote down their names. At one table was an aged man writing on the registration book the names and contact information of a dozen people, who he said were supporters of Kang.

“A lot of public officials are forced to come to these events and buy the books,” said one public official under condition of anonymity. “This season, there are so many of these to attend, but we have no choice but to attend them.”

Still, there have been cases where candidates were prosecuted for corruption at these book-signing events.

Former Rep. Shin Hak-yong of the New Politics Alliance for Democracy, predecessor of the Democratic Party, was investigated in 2014 for receiving 33.6 million won from the Korea Kindergarten Association at his book-signing event in 2013.

He was accused of being bribed to change regulations on private kindergartens. Shin was sentenced to 30 months in jail in the first trial, marking the first time a candidate was convicted for taking book money.

The court at the time presented guidelines on payments at book-signing events to be considered bribes. The guidelines were: if money is given systematically by a particular group; if the recipient has received prior information of the donation; if there is a favor requested in return; if the payment is excessively large.

In a separate case, former Jecheon Mayor Choi Myeong-hyun was fined 2.5 million won in his third trial in 2015, for soliciting support for his candidacy in his speech and through a video clip shown at his book-signing event in 2014.

“Local election commissions are watching the book-signing events closely,” said a member of the National Election Commission. “We are trying to push for more regulations that will limit the amount of money that can be paid at these events.”