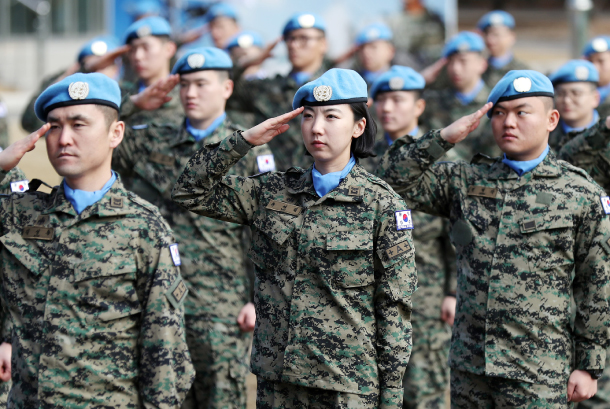 South Korean troops hold a send-off ceremony in Incheon on Monday. They are the ninth batch of troops to serve at the “Hanbit” unit for peacekeeping operations in South Sudan. [YONHAP]

Hundreds of South Korean soldiers will depart for South Sudan on Monday to carry out UN peacekeeping operations, the military here said.

The Army held a send-off ceremony on Monday for more than 280 rotational troops. They are the ninth batch of troops to serve at the “Hanbit” unit for eight months.

The contingent has been stationed in the country since March 2013 to support its recovery from a destructive civil war.

Selected from among roughly 2,000 applicants, the troops had eight weeks of training to prepare for their mission in Africa, including education on local culture and language, said the Army.

They will focus on helping repair the 200-kilometer (124-mile) road linking Bor, Mangela and Pibor, called Peace Road, it added. South Sudan declared its independence in July 2011 from its Arab-dominated northern neighbor Sudan after decades of civil war that claimed about 2 million lives.

The Hanbit unit was created in early 2013 after the National Assembly passed a related motion.