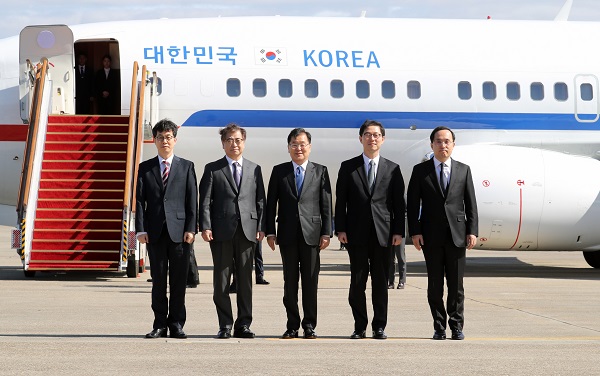 President Moon Jae-in’s special delegation to the North stands at Seoul Airport, a military air base in Seongnam, Gyeonggi, before their departure for Pyongyang on Monday. From left: Yun Kun-young, a senior Blue House official in charge of monitoring state affairs; Suh Hoon, director of the National Intelligence Service (NIS); Chung Eui-yong, chief of the National Security Office of the Blue House and head of the delegation; Chun Hae-sung, vice minister of unification and Kim Sang-gyun, second deputy director of the NIS. [YONHAP]

A delegation left for North Korea on Monday on a mission for President Moon Jae-in to persuade the Kim Jong-un regime to join denuclearization negotiations of some sort.

“I will clearly deliver the president’s strong and firm resolve to build a nuclear-free Korean Peninsula and true, permanent peace by keeping the flow of inter-Korean talks and improvement of relations,” Chung Eui-yong, the special envoy of President Moon, said in a press conference hours before his departure.

“In order to achieve the goal, I want to have a serious discussion with the North on plans to continue not only inter-Korean talks but also the North’s dialogue with the United States and the international community,” Chung said.

Chung, head of the National Security Office of the Blue House, led a 10-person delegation on a two-day trip to Pyongyang. In the delegation are five special envoys including Chung and Suh Hoon, director of the National Intelligence Service, Chun Hae-sung, vice minister of unification, Kim Sang-gyun, second deputy director of the NIS, and Yun Kun-young, a senior Blue House official in charge of monitoring state affairs.

The delegation also included five support staff from the Blue House.
The delegation, carrying a letter from Moon to Kim, left Seoul Airport, a military air base in Seongnam, Gyeonggi, around 1:50 p.m. on a special flight. They will meet with North Korean officials and attend a dinner. It remains to be seen if the North Korean leader Kim will host the event.

The trip reciprocates the North’s sending of a special envoy last month for the opening of the Winter Olympic Games. Kim Yo-jong, the North Korean leader’s sister, came to the South, met with Moon and delivered her brother’s invitation for an inter-Korean summit in Pyongyang.

The two-day trip by the special envoys is the first of its kind since Moon took office in May.
According to the Blue House, Chung and Suh will visit Washington after they return from Pyongyang to give briefings about their trip.
Chung will also brief the heads of the ruling and opposition parties on Wednesday about his mission.