Trump talks up chance of talking with North

Trump talks up chance of talking with North 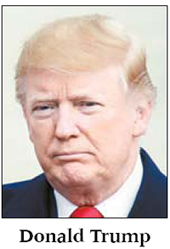 U.S. President Donald Trump indicated he would not rule out direct talks with North Korean leader Kim Jong-un at an annual dinner event in Washington, adding, “we will be meeting,” but only if the regime denuclearizes.

“They, by the way, called up a couple of days ago, and said, ‘We would like to talk,’” Trump said Saturday night at the annual Gridiron Club dinner in Washington, referring to North Korea recently expressing a willingness for dialogue with the United States.

The Gridiron Club is a journalistic association and speeches at its annual dinner are known for jokes, especially self-deprecatory ones by top politicians like the president. According to a White House pool report of his speech, Trump said, “I won’t rule out direct talks with Kim Jong-un. I just won’t. As far as the risk of dealing with a madman is concerned, that’s his problem, not mine.”

He added, “He must be a fine man.” This is not the first time Trump has complimented the North Korean dictator, referring to him as a “pretty smart cookie” last year, though his favorite moniker for Kim has been the mocking “Little Rocket Man.”

During his speech, Trump also defended a controversial tweet in January claiming he has a “bigger and more powerful” nuclear button than Kim Jong-un. He said this was only “in response” to Kim’s initial claim that he always had a nuclear button ready on his desk.

“Maybe positive things are happening,” Trump went onto say. “I hope that’s true, and I say that in all seriousness.”

He continued, “But we will be meeting, and we’ll see if anything positive happens,” remarks taken to be suggesting a new openness to dialogue with the North.

The tone of the closed-door dinner with many members of the press, which banned cameras, was generally casual, with Trump commenting and joking about an array of domestic and foreign policy issues.

But Trump’s remarks came at an especially sensitive time for a possible breakthrough with the North, as President Moon dispatched a South Korean delegation to Pyongyang Monday to encourage the regime to join denuclearization talks and start a dialogue with the United States.

“We did save the Olympics,” Trump claimed in his speech, and also mentioned that South Korean President Moon Jae-in gave him “a lot of credit” for the success of the PyeongChang Winter Games that took place in February and North Korea’s participation in it.

“And that’s true,” said Trump. “Whether people want to hear it or not, they had a very successful Olympics…it was heading for disaster, and now we’re talking.”

Trump suggested he considered North Korea’s participation in the Olympics and inter-Korean engagement a factor in its success despite Washington officials taking a hard line stance toward Pyongyang and introducing new unilateral sanctions during the Games.

The president also joked about Democratic Sen. Elizabeth Warren of Massachusetts suggesting that he and Secretary of State Rex Tillerson “should sit down with the leaders of Iran and North Korea and smoke a peace pipe.”

U.S. Sen. James Risch, a Republican from Idaho who recently visited South Korea as a part of a U.S. delegation to the Winter Olympics closing ceremony last month, also reiterated that Trump does not want war with Pyongyang.

He told The Atlantic Sunday that his warning of a brief conflict of “biblical proportions” between North Korea and the United States at the Munich Security Conference last month had been misinterpreted.

Rather than meaning Trump wanted to go to war with North, he said he meant that if leader Kim “keeps doing what he’s doing,” he will cause a war, and that the outcome of the current crisis is “in one person’s hands, and that’s Kim Jong-un.”

He was quoted as saying that there are two paths for the North: one that will result in Kim Jong-un staying in power, as head of state, and another that “is going to result in all likelihood in a termination of his regime.”

He added, “It is not the policy of the United States to pursue regime change. But these are his choices, not ours.”

Risch is said to have talked extensively to the president on the North Korea issue.

He discredited the notion of a “bloody nose” strategy - a limited, humiliating military strike on North Korea - and pointed out, “What a dumb thing to do. If you punch somebody in the nose, they’re not gonna stop and catch their breath. They’re gonna punch back.” He added things could get out of hand “really quickly.”

“I subscribe to the president’s theory that talking is good,” said Risch. He described that in the middle of the closing ceremony at the Olympics, “All of our cell phones went off at the same time to indicate that the South Koreans had announced that the North Koreans were ready to talk.”

He continued, “And we were surprised. Now what does that mean? We don’t know yet.” But he noted North Korea’s past history of making demands when they sit down at the negotiation table.

“They made demands before they’d even sit down at the table - they wanted food, they wanted oil and fuel, they wanted release of sanctions, and those were all given to them when the talks started last time,” he said. “That is not going to happen this time.”

South Korean Minister of Foreign Affairs Kang Kyung-wha said Monday that inter-Korean dialogue and improvements in relations “cannot proceed in the absence of progress in the efforts to peacefully resolve the North Korean nuclear issue, which requires, in the first instance, direct talks between the United States and North Korea.”

Speaking at a conference in Seoul, Kang said, “Inter-Korean dialogue and U.S.-North Korea dialogue must advance in a mutually reinforcing manner,” adding that while there was no direct contact between the U.S. and North Korean delegations on the sidelines of the Olympics, they were able to confirm a “willingness on both sides to engage directly.”