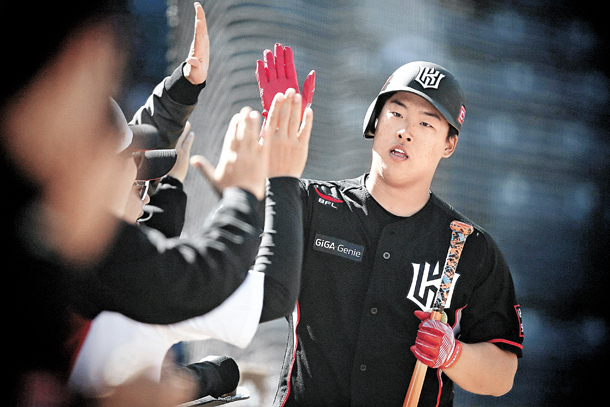 KT Wiz’s super rookie Kang Baek-ho high-fives his teammates after hitting a home run during a friendly game against the NC Dinos on Feb. 25. [KT WIZ]

KBO super rookie Kang Baek-ho has been living up to expectations at spring training, racking up the home runs as the KT Wiz train in the United States. 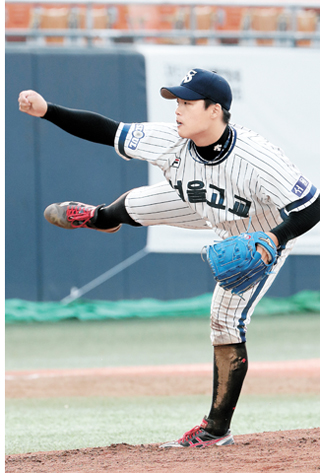 Kang recorded a batting average of 0.421 with eight hits during six friendly games, and he hasn’t been holding back. In his first eight hits in a Wiz jersey Kang got two home runs and four two base hits. During a friendly game against the NC Dinos in Rancho Cucamonga, California, on Feb. 26, Kang hit a home run that was 130 meters (426 feet) long.

Though he wasn’t able to produce another hit in the next two games, the 19-year-old’s home run was good enough to leave an impression.

“It’s not that I’m aware of long hits,” Kang said. “I guess training according to Coach Lee Ji-poong’s program allowed me to gain more power. I saw my weaknesses through the friendly games. I still need to work on hitting off changeups.”

Even before his KBO debut, Kang was a household name among high school baseball aficionados. Not only does he have the same name as the main character from famous basketball animation “Slam Dunk” from the 1990s, but Kang was the first player to hit a home run at the Gocheok Sky Dome in western Seoul when it first opened in 2015.

During the high school baseball championship last year, Kang managed to hit two home runs with a 0.422 batting average. His legend continued to grow when he decided to try his hand at pitching as well, turning up on the mound equipped with a 150 kilometer (93 miles) per hour fastball and sliders and changeups still hitting 140 kilometers per hour.

During his high school career, Kang hit 10 home runs. Although he has played as first baseman and pitcher, catcher is what he knows best, having stayed behind home plate for most of his senior year.

After the Wiz drafted Kang first last year, the team has made sure to highlight that it will develop him into a player that has the ability to pitch and bat, like Japanese star Shohei Ohtani. Ohtani, who signed with the Los Angeles Angels prior to this season, will try to play two positions in the major league this season.

But Kang has put aside his dream of being a pitcher for now.

“I don’t plan on having Kang as a pitcher unless it’s an event for the fans,” said Kim Jin-wook, manager of the Wiz.

As a result Kang has spent the offseason working on defense. Rather than his usual position of catcher, Kang has been playing as a left fielder since he joined the Wiz. This will allow him to minimize the pressure in defense and lean more on his biggest strength - those long hits.

The hitter’s drive has caused him problems in the pass. At the beginning of spring training, Kang twisted his ankle while playing in defense after he landed between the grass and the warning track. Though it wasn’t a big injury, he still had to take a week off.

“Since its [Kang’s] first time playing outfield, he is very passionate in training,” said one coach. “Even after training finishes, he watches videos of other outfielders for hours.”

The Wiz, which joined the KBO in 2015, hope to move up in the standing, as it finished last in the past three seasons. With the addition of the Doosan Bears’ Dustin Nippert, the Wiz has built a promising pitching lineup. Last season, despite the club’s last place finish, Ryan Feierabend had the lowest ERA in the KBO, picking up eight wins and ten losses with a 3.04 ERA.

The club’s batting lineup will be strengthened as well with the return of Hwang Jae-gyun. Once Kang finds his feet, the Wiz is expected to start to climb the ranks. Even manager Kim Jin-wook believes that the club’s performance this season will rely on Kang’s performance. In friendly games, Kim had been assigning Kang to various spots in the batting order. During Monday’s game Kang was up first.

Though the season hasn’t started, a number of rookies are expected to impress the fans this year. The Lions’ Yang Chang-seok, the Bears’ Kwak Bin and the Lotte Giants’ Han Dong-hui are rated as players that have the potential to have a direct impact on their respective teams.

The majority of the rookies are considered “Beijing Kids” - players who were inspired by Korea’s victory at the 2008 Beijing Olympics and the 2009 World Baseball Classic while watching it on television.