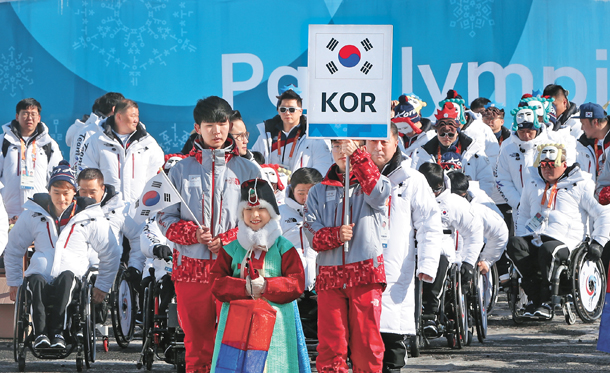 Korean athletes and volunteers enter the athletes’ village in Pyeongchang County, Gangwon, on Tuesday for the 2018 Paralympics. [YONHAP]

Korean athletes competing for the PyeongChang 2018 Paralympics entered the athletes’ village in Pyeongchang County, Gangwon, on Tuesday. Along with athletes from the Czech Republic, Korea was one of the first teams to have its welcome ceremony.

It has been 30 years since the Paralympics came to Korea, when it hosted the first-ever joint Olympics and Paralympics at the Seoul 1988 Summer Games.

The PyeongChang Paralympics will also make history by hosting the largest number of athletes, with 49 countries and 570 athletes all scheduled to arrive by Thursday.

Heading to the Games with 36 athletes, Korea hopes to win its first-ever gold medal at the Paralympics while its goal for the overall medal standing is to place 10th.

Sin lost both his legs in a car accident the day before his college graduation in 2006. Ten years later, the skier rose to the top in Korea and was named Most Valuable Player at the 2016 National Winter Para Games.

North Korea also agreed to participate in the Paralympics for the first time and will send a 24-member delegation to the event, including six athletes, according to the South’s Unification Ministry. The delegation is expected to arrive at the athletes’ village on Wednesday and is scheduled to have its welcome ceremony on Thursday.

Due to its state-sponsored doping scandal, Russia will once again only be allowed to send neutral players under the name “Neutral Paralympic Athletes” (NPA), with 30 participating athletes. Instead of their national flag, NPAs will bear the Paralympic symbol (three agitos), which is red, green and blue, on their uniforms.

Although originally coined as a portmanteau of “paraplegic” and “Olympic,” the current explanation for the name used by the International Paralympic Committee is that it represents the Greek preposition “para,” meaning “alongside,” and “Olympic,” indicating that the Paralympics are the parallel Games to the Olympics.

The event was originally known as the Stoke Mandeville Games and was founded in 1948 with 16 wheelchair athletes taking part in archery. The first Paralympic Winter Games were held in 1976 in Sweden with only two sports, para-alpine skiing and para-cross-country skiing.

The opening ceremony for the Paralympics will take place at the Olympic Stadium in Pyeongchang County on Friday at 8 p.m.