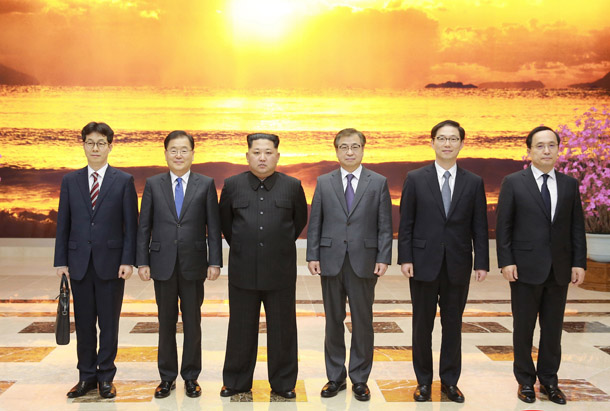 Former United States Special Representative for North Korea Policy Joseph Yun was called a “dreamer” by the hawks in Washington. Yoon’s vision to resolve the North Korea nuclear issue through talks sounded like a dream. Yun lived in Korea until he turned ten and is fluent in Korean. After he became an American diplomat, he worked at the U.S. Embassy in Seoul twice. He served as the New York channel with North Korea and dealt with North Korean diplomats in Oslo in May 2017. As he was deeply attached to Korea, he would not want the military option that would put the Korean Peninsula at the risk of all-out war.

His departure and the withdrawal of Victor Cha, another opponent of military options, from his nomination as ambassador to Korea signified the fall of the “doves,” the champions of talks.

Last month, Yun visited a Korean think tank and had a discussion with Korean experts. He said the most frustrating thing was how North Korea believed that the United States would never attack. However, it is not just North Korea who acted upon this belief. He added that Seoul also believed that military action would not happen, but that was hardly the case. In the end, the policy makers in both South and North Korea ignored the possibility of an attack by the United States. He warned that may be a fatal mistake.

A South Korean delegation flew to Pyongyang on Monday. Naturally, we have hopes that the peacemakers would resolve the nuclear issue with talks. However, Washington remains dubious and is awaiting the outcome with arms impatiently crossed.
While the Moon administration may drink a toast to its achievement, it could be more than premature. It could be a poisoned chalice. If not much is gained by the delegation, hawks in Washington would say that talks are useless. Unsubstantial inter-Korean talks would only reinforce some justification for military attacks. There are rumors that White House National Security Advisor H. R. McMaster could be made United States Force Korea commander. If he is, the possibility of attacks on North Korea would grow.

Offering the wrong carrots is another problem. There are predictions that major proposals could be shared between Seoul and Pyongyang. There are rumors that postponement or cancellation of the U.S.-Korea joint military exercises or resumption of activities at the Kaesong Industrial Complex or the Mount Kumgang tourist complex were considered. Korea could be misunderstood as abandoning sanctions on North Korea. Some say that Korea is in the driver’s seat all right ― and speeding toward a cliff.

In the past, the United States offered carrots for signs of peaceful resolution. In 2006, Washington believed that Pyongyang would suspend operations at the nuclear facilities in Yongbyon so it unfroze North Korean funds at Banco Delta Asia. Sanctions were lifted for the Joint Declaration on the Denuclearization of the Korean Peninsula in 1992, the Geneva Agreement in 1994 and the four-party meeting in 1998.

But much has changed. North Korea promised to stop provocations but sold missile technologies and developed nuclear weapons. Washington is firm that it won’t be fooled again. As President Moon Jae-in said, making vain promises out of impatience is worse than not meeting at all. And the United States, which is leading the sanctions, may refuse to offer carrots such as postponing the joint drills.