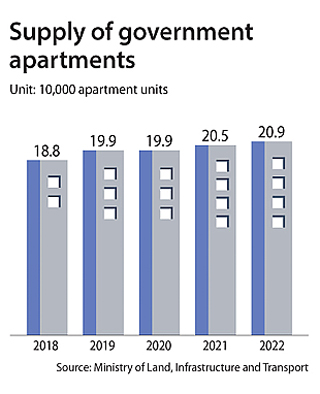 The government will offer 188,000 apartments to lower income families, young people starting their adult lives and newlyweds this year, including 39,000 in greater Seoul.

The Ministry of Land, Infrastructure and Transport Tuesday announced detailed plans for government apartment supplies for this year.

This is part of a greater plan to offer 1 million units through 2022.

The apartments for this year include 130,000 units that will be leased, 18,000 units to be sold to private landlords and 40,000 units built by private construction companies with government financial aid.

The largest number of newly built apartments-29,000-will be in Gyeonggi. Many people have relocated from Seoul to Gyeonggi to find cheaper housing. The Gyeonggi apartments include 10,000 Haengbok apartments, which newlyweds and college students can rent for a minimum of six years and 3,000 government apartments for lease that guarantee a maximum rent amount for 30 years.

Gyeongsang comes in second with 18,000 units.

Seoul will receive the largest number of apartments that the government purchases or signs long-term leases with existing landlords.

“In order to achieve our goal of leasing 130,000 units and selling 18,000 units this year, we will work closely with local governments,” said a Land Ministry official. “In particular we are considering providing incentives at the end of the year to local government that have been exceptional [in supplying government apartments].”