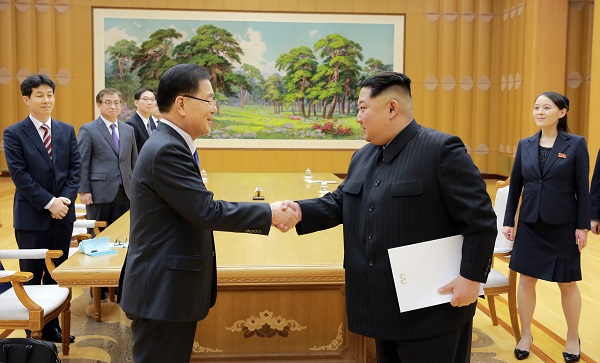 In a more than four-hour meeting Monday night, North Korean leader Kim Jong-un and five special envoys from South Korea discussed how to improve inter-Korean relations and guarantee peace and stability on the Korean Peninsula, Seoul and Pyongyang said Tuesday.
Five envoys of South Korean President Moon Jae-in, including Chung Eui-yong, head of the National Security Office of the Blue House, attended a meeting and dinner hosted by Kim for four hours and 12 minutes starting from 6 p.m. on Monday, the Blue House said.

“The meeting and dinner took place at the headquarters building of the North Korean Workers’ Party,” Kim Eui-kyeom, Moon’s spokesman, said. “It is the first time that South Korean officials visited the Workers’ Party headquarters.”

According to the Blue House spokesman, Kim attended the meeting with two close aides: younger sister Kim Yo-jong, who serves as the first vice-director of the Central Committee within the Workers' Party, and Kim Yong-chol, a vice chairman of the Central Committee of the Workers’ Party. Kim Yong-chol is also known to be director of the committee’s intelligence arm, the United Front Department.

Following the meeting, the envoys and the three North Korean leaders attended a dinner, where more members of Pyongyang’s power elite were gathered. Kim Jong-un’s wife, Ri Sol-ju, attended as well as Ri Son-gwon, chairman of the Committee for the Peaceful Reunification, Maeng Kyong-il, deputy director of the United Front Department and Kim Chang-son, chief secretary to the North Korean leader.

According to the source, the results of the discussions included an arrangement of an inter-Korean summit between Moon and Kim Jong-un. Steps to end North Korea’s nuclear arms program were also believed to be discussed, he said.

Earlier in the morning, the North’s Korean Central News Agency issued a report about the envoys’ meeting with Kim. The report said the North Korean leader listened to President Moon’s ideas about the inter-Korean summit proposal and exchanged opinions. The two sides reached a “satisfactory agreement,” the report said.

Kim sent his sister, Yo-jong, as his special envoy to South Korea in February and invited Moon to visit Pyongyang. Moon’s envoys were making the visit in reciprocation of Kim Yo-jong’s trip.

The report also said the North Korean leader and the South Korean envoys had a candid discussion on issues to improve inter-Korean relations and peace and stability on the Korean Peninsula. The two sides also had a serious discussion on easing military tensions on the peninsula and dialogue and cooperative exchanges between the two Koreas.

While the report said Chung delivered Moon’s letter to Kim, it made no mention of Moon’s push for denuclearization and direct talks with the United States. Before leaving for Pyongyang on Monday, Chung said in a press conference that it was his mission to deliver Moon’s determination to build a nuclear-free Korean Peninsula and persuade Pyongyang to start talks with Washington and the international community.