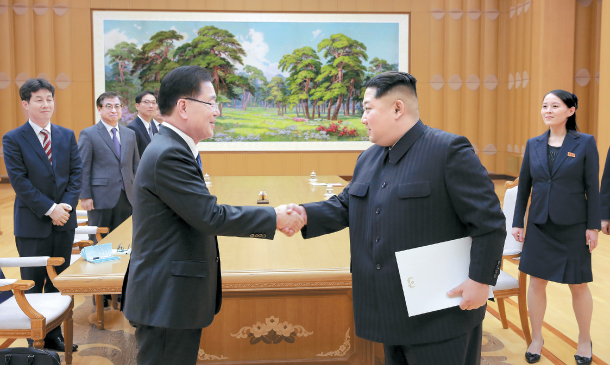 North Korea expressed its intention to have a candid dialogue with the United States to discuss denuclearization and promised a moratorium on nuclear and ballistic missile tests during the period of talks, President Moon Jae-in’s special envoy to Pyongyang said Tuesday.

The two Koreas also agreed to hold a summit at the truce village of Panmunjom in late April, Chung Eui-yong, head of the Blue House’s National Security Office, said in the evening as he announced the outcome of his two-day trip to Pyongyang, which included a meeting with North Korean leader Kim Jong-un that lasted more than four hours.

“North Korea made clear its will for denuclearization of the Korean Peninsula,” Chung said. “It also assured that it has no reason to own nuclear arms if military threats against the North are resolved and the regime’s security is guaranteed.”

According to Chung, the North also expressed its intention to have candid talks with the United States to discuss denuclearization issues and normalization of North Korea-U.S. relations.

“While the talks are ongoing, the North made clear that it will not conduct any additional nuclear tests or ballistic missile firings,” Chung said. “Furthermore, the North assured that its nuclear weapons and conventional arms will not be used against the South.”

Chung also said the two Koreas agreed to create a hotline between Moon and Kim for consultations and to ease military tensions. They agreed to have their first phone call before the summit in April.

The two Koreas will start talks to arrange the summit, which will take place at Peace House in Panmunjom, in late April. The North also invited the South Korean taekwondo demonstration team and artists to Pyongyang in order to continue the reconciliatory mood between the two Koreas.

Five envoys of Moon, including Chung, visited the North on Monday on a mission to persuade the North to start talks with the United States for denuclearization. Suh Hoon, director of the National Intelligence Service (NIS), Chun Hae-sung, vice minister of unification, Kim Sang-gyun, second deputy director of the NIS, and Yun Kun-young, presidential secretary for state affairs monitoring, were other special envoys.

The five envoys attended a meeting and dinner hosted by North Korean leader Kim for four hours and 12 minutes starting from 6 p.m. on Monday. After further talks with North Korean officials, the delegation returned to Seoul at 5:58 p.m. Tuesday and briefed Moon about its trip. Chung, then, held a media conference to announce the outcome of his visit.

Chung said he will visit the United States to brief the Donald Trump administration about the trip. He said that he has a message from the North to be delivered to the United States, but refused to elaborate on the specifics.

Earlier on Tuesday, expectations were sanguine about the achievements of the trip, as both Seoul and Pyongyang spoke positively about the special envoys’ visit.

The report said the North Korean leader and the South Korean envoys had an “openhearted talk.”

While the report said Chung delivered Moon’s letter to Kim, it made no mention of Moon’s push for denuclearization and direct talks with the United States.

The North Korean media issued unusually fast and detailed reports about the visit by Moon’s special envoys to Pyongyang. Photos of the events hosted for the visitors were also released with scant delay.

The young ruler’s approach to yesterday’s meeting and dinner was clearly different from his father. When South Korean officials visited the North for meetings with Kim Jong-il, he kept them in suspense without any definite schedule until he made surprise appearances.

Kim Jong-un met with the special envoys only three hours after their arrival and hosted a dinner for several hours.