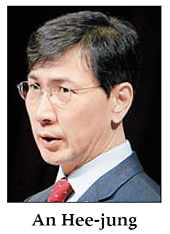 South Chungcheong Gov. An Hee-jung resigned Tuesday after his secretary said he raped her multiple times, becoming the most prominent figure to be disgraced in Korea’s snowballing Me Too movement.

Kim Ji-eun, 33, An’s secretary, accused the governor Monday of raping her four times and sexually harassing her more often during her eight months working in his office.

Kim went public with her allegations against An, 52, a Democratic Party presidential hopeful, in an interview with JTBC Newsroom Monday evening.

She summoned the courage to go public from the Me Too movement, which has taken off in the past month after prosecutor Seo Ji-hyeon came forward in late January on the same program with a story of being groped by a superior.

She said that in Switzerland, she tried to refuse to have sex with him, saying, “I don’t know.”

“I expressed it the best I could in my position,” said Kim. “Because I never refuse anything while working or say something is difficult, hesitantly saying it was difficult was the best defense I could muster. It was my utmost refusal, and the governor would have understood that.”

On Feb. 25, after the Me Too campaign had gained momentum across the country, An discussed the movement with Kim - and he raped her again.

Kim said that one senior colleague noticed the situation, and Kim admitted to her what had happened. But ultimately nothing was done.

She said that An usually texted her over Telegram, an instant messaging service that sends encrypted texts that can be set to automatically disappear after a certain period.

“I am scared of the many changes that I will have to face after this interview,” said Kim. “But what I am more afraid of is Gov. An Hee-jung. I actually thought that I could possibly disappear after today, and I hoped that through this broadcast, the people would protect me even a little bit and that they will help me reveal the truth. Because I have such a different existence from the governor, I wanted to gain strength from the people, to be able to stop him.

“I know that there are other victims as well,” she said. “I hope to give them courage.”

Kim said she would file a criminal complaint against An Tuesday.

But early Tuesday, mere hours after Kim’s interview, An posted an apology to the public and Kim on his Facebook page and admitted his office was wrong in saying that the relationship was consensual.

“More than anything, I am sorry to Kim Ji-eun, who has been pained because of me,” wrote An in the Facebook post. “I ask for forgiveness for my foolish actions.

“It was all my fault,” he added, saying that he would step down as governor immediately and halt all political activities.

An tendered his resignation to the South Chungcheong Provincial Council at around 10 a.m., within 14 hours of Kim’s interview airing.

The letter described the reason for resignation as “personal circumstances.”

The council approved An’s resignation during a general assembly held the same day. Kim’s employment as the governor’s secretary also ended with his resignation.

Six members of An’s secretariat resigned along with the governor.

Police on Tuesday launched an internal probe into the allegations against An. They will question Kim on the four accusations of rape and have her submit any evidence including text messages exchanged with An. Once confirmed, the Chungnam Provincial Police Agency will conduct a full investigation into the case.

Kim has said that there are some messages in the Telegram app that she saved.

An, a former aide to the late President Roh Moo-hyun and a democratic activist in his youth, was elected governor of South Chungcheong in 2010 and re-elected in 2014. He announced at the end of last year that he would not run again for another four-year term.

He announced a presidential bid in January 2017 and was eventually beaten by Moon Jae-in as the liberal candidate. Moon was elected president that May.

The ruling Democratic Party has been thrown into turmoil, fearing the ramifications of An’s scandal on the upcoming June 13 local elections, which are just 100 days away.

An was seen as a key contender for the presidential race in 2022, but his 29-year political career seems to have crashed.

“This is something that cannot happen,” said Choo Mi-ae, chairwoman of the Democratic Party, in a press conference on Tuesday at the National Assembly in western Seoul following the reports about An. “As chair of the party, I extend my apologies to the victim and the people.”

She added that the party decided to expel An.

The party’s supreme council convened the previous night after the interview aired and reached a decision to expel him, the highest disciplinary action it can take.

Choo wrote on a Facebook post, “After I returned home late at night, I felt ashamed to look at my two daughters, who stared up at me with anxious eyes…

“Both as head of the Democratic Party and a mother, I plan to brace myself for a change in the gender culture.”

An’s resignation may have repercussions in the middle-ground Chungcheong area, considered a crucial swing region in elections.

There are growing concerns of more politicians becoming accused of sexual misconduct as Korea’s Me Too movement continues to build up steam and support.