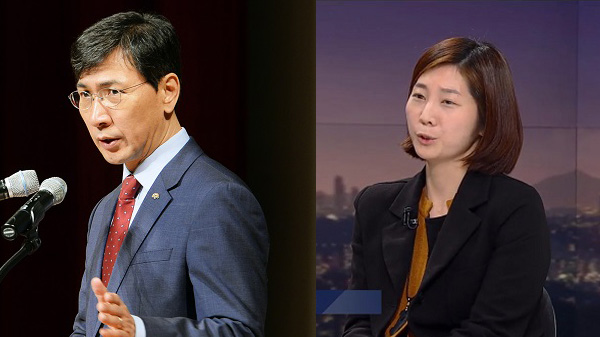 South Chungcheong Gov. An Hee-jung resigned Tuesday after his secretary said he raped her multiple times, becoming the most prominent figure implicated in the snowballing Me Too movement in Korea.

Kim Ji-eun, 33, An’s secretary, accused the governor Monday of raping her four times and sexually harassing her numerous times during her time in his office over the past eight months.

Kim went public with her allegations against An, a high-profile politician from the liberal Democratic Party with presidential ambitions, in an interview with JTBC Newsroom Monday evening.

She gained the courage to go public from the Me Too movement, which has taken off over the past month after a prosecutor, Seo Ji-hyeon, came forward with her story of being groped by a superior on the same program in late January.

She said that in Switzerland, she tried to refuse to have sex with him, saying, “I don’t know.

“I expressed it the best I could in my position,” said Kim. “Because I never refuse anything while working or say something is difficult, hesitantly saying it was difficult was the best defense that I could muster. It was my utmost refusal, and the governor would have understood that.”

On Feb. 25, after the Me Too campaign had gained momentum across the country, An discussed the movement with Kim -- and raped her again.

Kim said that one senior colleague noticed the situation, and Kim admitted to her what had happened, but ultimately nothing was done about it.

She said that An generally texted her over Telegram, an instant messaging service that can send encrypted texts that can be set to automatically disappear after a certain period.

“I know that there are other victims as well,” she said on why she came forward. “I hope to give them courage.”

She said she would file a complaint with prosecutors against An Tuesday.

But early Tuesday, mere hours after Kim’s interview, An posted an apology to the public and Kim on his Facebook page and said that his office was wrong in saying that the relationship was consensual.

“It was all my fault,” he said, saying that he will step down as governor immediately and halt all political activities.

An was elected governor of South Chungcheong in 2010 and re-elected in 2014.

Police on Tuesday launched an investigation into the allegations against An.