Korean national bobsled and skeleton team head coach Lee Yong on Wednesday lamented the lack of support from the government after the PyeongChang Winter Olympics. 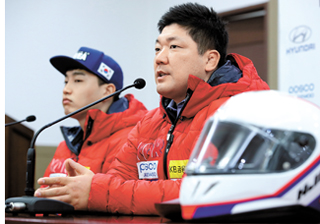 Korea earned one gold and one silver in sliding sports at the 23rd Winter Games in Pyeongchang, Gangwon. Yun Sung-bin claimed gold in the men’s skeleton, while the four-man bobsled team of Won Yun-jong, Seo Young-woo, Jun Jung-lin and Kim Dong-hyun took silver.

Lee, however, lamented that they cannot use the Olympic Sliding Centre, the venue of sledding sports at the Olympics, due to administrative reasons. He said the government has yet to find an operator for the track, which is certified by the International Bobsleigh and Skeleton Federation (IBSF), after the Olympics, and therefore, no budget was allocated for the venue.

“Our athletes have proved their talent internationally, but now we’re told that we can’t use the track,” Lee said during a press conference at Olympic Parktel in southern Seoul. “They told us a lack of budget is the reason.”

Lee also criticized the Korean Sport & Olympic Committee’s (KSOC) decision to disband the reserve squad for the national bobsled team. He said the KSOC made the decision because there are not many registered bobsledders in the country.

“The reserve members also worked hard with our athletes for the Olympics, but they are all gone as of yesterday,” he said. “It’s so painful and sad.”

Lee said such actions discourage athletes and coaches from competing for Korea.

“The country must know for what and why we devoted ourselves at the Olympics,” he said. “All of us worked hard together, but no one knows the people who contributed behind the scenes.”

Lee urged that, for the future of Korea’s sliding sports, the government and the sports federation need to come up with plans to support athletes.

“The PyeongChang Olympics are not the end,” he said. “We need measures to use the facilities after the Olympics and foster future athletes. It’s my job to produce the next Yun or Won, and it has to be done.”