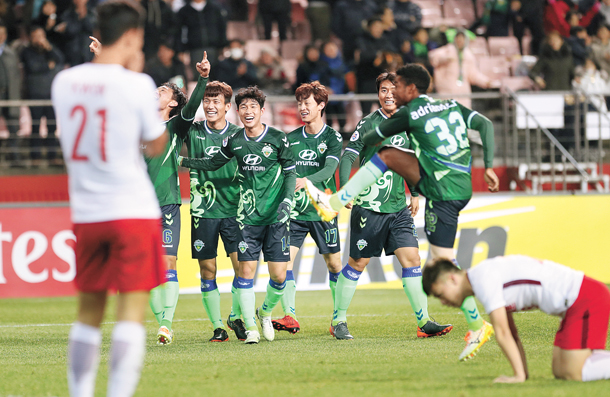 The Jeonbuk Hyundai Motors earned their third straight win on the back of a hat trick, while another Korean team, Jeju United, blew a two-goal lead in an away loss in Asia’s top club football competition on Tuesday.

Jeonbuk, the 2016 AFC Champions League winners, remained in first place in the group with nine points, thanks to their three wins in three matches. The top two clubs from each of the eight groups will advance to the knockout phase, which starts in May.

But Jeju United squandered a 2-0 lead in their 5-3 loss to Guangzhou Evergrande in Group G at Tianhe Stadium in Guangzhou, China. Ricardo Goulart scored four goals for Guangzhou, which jumped from fourth to first place with five points. Jeju, with one win and two losses, dropped to last place in the group.

Jeonbuk entered this contest having lost just one of their previous 12 AFC Champions League matches, with seven wins and four draws. They were unbeatable at home on Tuesday, despite giving up the match’s first goal.

Tianjin dodged a couple of early bullets before Zhang Cheng put them on the board in the 10th minute with a volley. Jeonbuk failed to clear the ball after a Tianjin corner kick, and Zhang capitalized on the open chance from just outside the box.

Jeonbuk thought they tied the score on Kim Shin-wook’s header seven minutes later, but Kim was ruled offside on the play.

Kim finally scored one that counted in the 24th minute, when he headed home a Lee Yong cross from long distance. Kim, the tallest Jeonbuk forward at 196 centimeters (6 feet, 5 inches), boxed out Tianjin midfielder Sun Ke as he put the ball past helpless goalkeeper Zhang Lu.

Zhang was the victim of another Jeonbuk header in the 42nd minute, this time by Han Kyo-won. The go-ahead marker came at the tail end of an outstanding buildup deep in the offensive zone, with Lee Jae-sung’s sharp cross from the left setting up the goal.

Jeonbuk kept the pedal to the metal in the second half. In the 56th, Ricardo Lopes made it 3-1 for Jeonbuk, with Han getting the assist on the play. Just four minutes later, Kim Shin-wook scored his second goal of the evening, as a cross by Lee Yong glanced off Han’s head and went in off Kim’s thigh.

Kim completed his hat trick in a more conventional style in the 65th minute. Left back Kim Jin-su threaded a perfect low pass and Kim one-timed it home to put Jeonbuk up 5-1.

Kim was lifted from the match two minutes later for fellow forward Adriano, and Jeonbuk wasn’t done toying with Tianjin’s defense. Choi Bo-kyung got the team’s sixth goal after a penalty box scramble.

Tianjin got a goal back in the 79th with a header by Zhao Xuri, and Alexandre Pato converted a penalty in the 89th to make the final score more respectable for the visitors at 6-3.

In Guangzhou, Jeju United opened the scoring in the 20th minute with Jin Seong-uk’s header. Goalkeeper Zeng Cheng got his hands on a Jung Da-hwon cross, but Jin was left all alone in the goalmouth to head home the rebound.

Jeju doubled the lead just before the half-hour mark, as Magno Cruz scored off a loose ball after a free kick went off a body and landed at his left foot.

But down 2-0, Guangzhou shook off some early rust and hit back with five goals.

The first of those came in the dying moments of the first half, as Alan capitalized on Jeju’s bad clearing attempt following a corner kick.

Guangzhou picked up right where they left off to begin the second half. Goulart tied the score in the 52nd minute by pouncing on a rebound after Yu Hanchao’s shot. Five minutes later, Goulart converted a penalty, awarded when Cho Yong-hyung fouled Gao Lin on a breakaway chance, to put Guangzhou ahead 3-2.

The Brazilian completed his hat trick in the 86th minute, as he took a feed from Gao, and then picked up his fourth goal in added time for good measure, with a deft chip over goalkeeper Lee Chang-geun for a 5-2 lead.

Lee Chang-min scored one for Jeju moments after Goulart’s fourth, though it was far too little, too late for the Korean club.