Winter Paralympics: The rules you need to know

Winter Paralympics: The rules you need to know 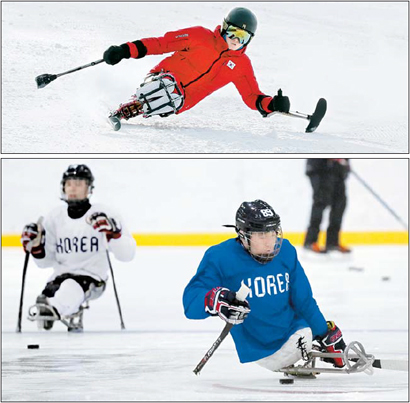 Korea will always have a place in Paralympics history - it was here 30 years ago at the Seoul 1988 Summer Games that the Olympics and the Paralympics first shared a host city - and that tradition will continue this year. The PyeongChang Paralympics will make its own history with more athletes than ever before - 570 athletes from 49 countries - scheduled to arrive by Thursday.

Heading to the Games with 36 athletes, Korea hopes to win its first-ever gold at the Paralympics, hoping to place 10th in the medal table.

Although the events at the Paralympics are similar in concept to Olympic sports, the rules are noticeably different. Paralympians are assigned categories based on their impairment. These classifications determine which athlete is eligible to compete in which event and how they are scored. As different sports require different physical activities, classifications are specific to each style of event.

Alpine skiing, cross country skiing and biathlon have events for visually impaired athletes. In each of the visually impaired events, athletes race with a guide runner. The guide wears a brightly colored vest with “G” emblazoned on it and both the guide and the athlete have wireless communication devices attached to their helmet so they can communicate to navigate the course.

In visually impaired events, teamwork between the athlete and the guide is crucial. As a result, if an athlete wins a medal, their guide also gets one - providing they raced together in every heat.

There are three different medal contests in each skiing event: visually impaired, standing and sitting. Within each event, athletes are classified based on their impairment, and the score takes these classifications into account.

As a result, the athlete that finishes the race first does not necessarily win gold. An athlete’s finishing time is multiplied by their classification factor, and this determines the final standing.

In sitting events, if the result ends as a tie after the classification factor calculations are made, the athlete who first crossed the finish line is the winner. In visually impaired events, times are only based on the competitor and not the guide.

The equipment used in the Paralympics is also different depending on the physical requirements of the sport. In ice hockey, players compete on a sledge and rely on their upper body strength. As such, they use two hockey sticks that are about 80 to 90 centimeters (31 to 35 inches) shorter than ice hockey sticks used in the Olympics.

In alpine skiing sitting events, skiers race down the slope on sit-skis or mono-skis. Rather than the poles, para-skiers use outriggers, which help assist with balance, controlling their speed and changing direction.

In biathlon, which requires athletes to be able to ski and shoot a rifle, visually impaired athletes use an electronic rifle that has an aiming system which provides audible feedback to the athlete through a headset.