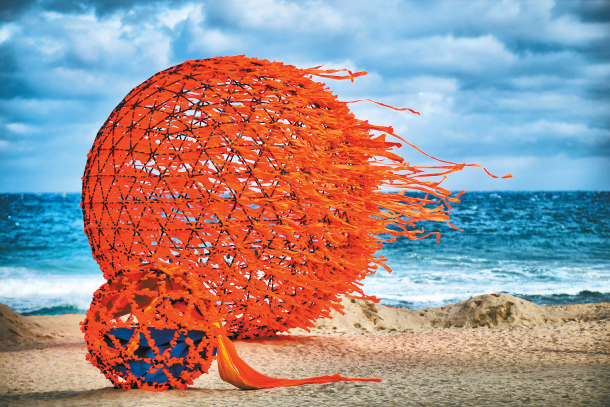 “Paralympic Fire Art Festa 2018,” an installation created together by artists with and without impairments, is installed at Gyeongpo Beach in Gangneung, Gangwon. [MINISTRY OF CULTURE SPORTS AND TOURISM]


The Games aren’t over yet. The 2018 Winter Paralympic Games kicks off Friday in Pyeongchang County, Gangwon, and so do the abundant cultural events being staged in tandem with the international sporting event. Although the number of offerings are fewer than what was available during the Olympics, some new events have been added, including a contemporary dance performance by dancers with impairments as well as shows featuring artists who have a range of abilities.

To signal the start of the Paralympics, a fireworks show titled “Fire Fantasy” will light up the Olympic venue every night from Friday until March 18. At the Festival Park in both Pyeongchang and Gangneung, there will also be a large-scale video projection titled “70MK - Just Simply Korea,” which shows interviews with visitors and participants of the recently-wrapped Olympic Games. According to the Ministry of Culture, Sports and Tourism, the title “70MK” refers to 70 million North and South Koreans, hoping to show that “the Olympic Games as well as the Paralympics are events organized with one heart.”

Upon arriving at Gangneung Station on Saturday, visitors may be welcomed by the beautiful sounds of harps and flutes. To celebrate the 23rd Winter Olympic Games and the 12th Winter Paralympics in Pyeongchang, 23 harpists and 12 flutists will hold three concerts - at 3, 4 and 5 p.m. - on Saturday.

Left: A puppet show titled “Jeongseon Arirang” will be performed at 5:30 p.m. at the Gangneung Arts Center on March 17.

Some of the new events for the Paralympics are the “Dal+Dalhan Art Show,” which will take place on a special stage on Wolhwa Bridge in Gangneung and the “Paralympic Fire Art Festa 2018,” which will be held at Gyeongpo Beach in Gangneung. According to the Culture Ministry, artists with and without impairments worked together to create an installation under the theme, “Gangwon’s Natural Environment.” The installation and the art show will be held throughout the Paralympics.

There’s also an array of performances being held at the Gangneung Arts Center during the event as well.

“Dream Concert: The Healing,” which is a show featuring K-pop artists, dancers and magicians will be staged at 7:30 p.m. on March 17. The “Heart to Heart” concert, which will be held on March 13 at 7:30 p.m., also features musicians with impairments. The Heart to Heart ensemble is composed of young students with intellectual impairments and has been one of the most active ensembles of impaired musicians in Korea since 2006.

All performances are provided for free upon making a reservation at the official website of the Gangneung Arts Center (www.gn.go.kr/artscenter/index.do).

Meanwhile in Seoul, collaborative dance performances by Korean and overseas dancers, bringing together those with and without impairments, are being staged.

“TWO Be To One,” a series of dance performances taking place in Seoul and Chuncheon in Gangwon, began on March 3 at the Mary Hall at Sogang University, western Seoul. According to organizers, this joint project began in 2017 by CANE: Contemporary Art Natural & Extension Movement, a dance troupe composed of dancers with impairments. For the Paralympics, the dance troupe collaborated with a Swiss dancer, choreographer and videographer Alessandro Schiattarella, as well as students with intellectual impairments at Korea’s Kkumnamu Alternative School. 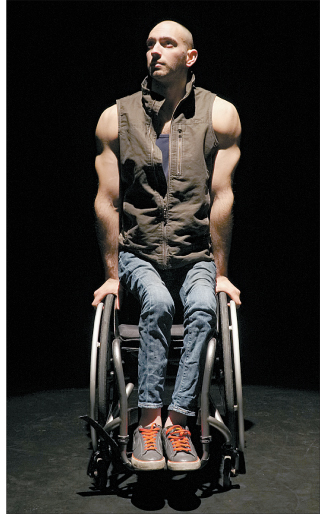 Joel Brown of Candoco Company, a dance troupe based in the U.K. composed of dancers with and without impairments, will perform “Good Morning Everybody.” [LEE JIN-WON]

Five children from Laos who became physically impaired after land mine accidents have also been invited to participate as artists in the performance. Professional dancers from Korea, Japan, Singapore, Norway, Denmark and Congo worked together with the children to put up the show.

Organized by the British Council, a festival highlighting artists with impairments will also begin on Friday at the Arko Arts Theatre in central Seoul. “Festival of Arts and Disability: Beautiful Differences,” according to the British Council, is the closing event of the year-long U.K./Korea 2017-18 Creative Future project of cultural exchanges.

There will be four programs, including the world premieres of “Good Morning Everybody,” co-produced by Candoco Dance Company and Korea’s renowned contemporary dancer and choreographer Eun-Me Ahn; “Zero: Restriction Body and Time” by Marc Brew and Kim Bo-ra; “11 Million Reasons to Dance”; and finally “Sync Korea.”

“11 Million Reasons to Dance” is a piece conceptualized by People Dancing in 2014 to “positively profile deaf and disabled people in dance activity in the U.K.,” according to the British Council, while “Sync Korea,” the Korean version of “Sync,” which was developed by two impaired artists from the U.K., Sarah Pickthall and Jo Verrent. The two dancers worked with impaired Korean artists and producers to come up with the piece. For more information about the festival, visit www.britishcouncil.kr/en.