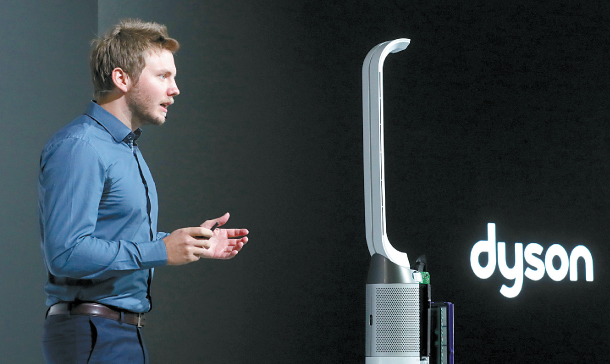 
Dyson is ditching the cord for good.

The British vacuum cleaner maker signaled an end to the era of plug-in vacuum cleaners, confident that its latest cordless model can take on traditional tethered machines.

“We have decided to stop developing plug-in vacuum cleaners,” James Dyson, founder of the company, said at a product launch in New York on Tuesday, one day before the Dyson team came to Seoul for the first unveiling of its newest vacuum cleaners and air purifiers in Asia.

On why the company chose Seoul for the Asia debut, John Churchill, vice president for floor care and robotics, said, “The Korean people are very interested in new engineering and technology.”

The Cyclone V10 series has 20 percent more suction capacity than its V8 predecessor, according to the company. The V10 motor at the heart of the cleaner can trap 99.97 percent of particles as small as 0.3 microns. The 14 cyclones that align the motor generates 79,000g (acceleration due to gravity), separating fine dust at a speed of up to 120 miles per hour.

Various features of the Cyclone V10 make it more user-friendly, the company said. It can be quickly reassembled as a handheld vacuum cleaner and boasts a “point and shoot” debris-emptying technology to prevent users from getting their hands dirty.

The air purifier also has much to offer. “The air leaving the purifier will be cleaner than the air we now breathe,” design manager Hugo Wilson said.

The Dyson Pure Cool captures up to 99.97 percent of allergens and pollutants through its 350 degree-turn filter, according to the company. Its three sensors can collect air quality data and display it in real time on an LCD screen. The sensors can detect dust size and concentration as well as volatile organic compound exposure, humidity and temperature.

“People don’t eat food or drink water that contains bacteria, but they seem to have different standards when it comes to air,” Wilson said. “But the Pure Cool makes the invisible visible.”

Dyson has been investing heavily on new technology for vacuum cleaners and air purifiers. The Pure Cool, for example, was a product of research collaboration with King’s College London and Peking University.

“We are planning to invest around 8 million pounds [$11 million] every week for research and development in 2018,” Churchill said.