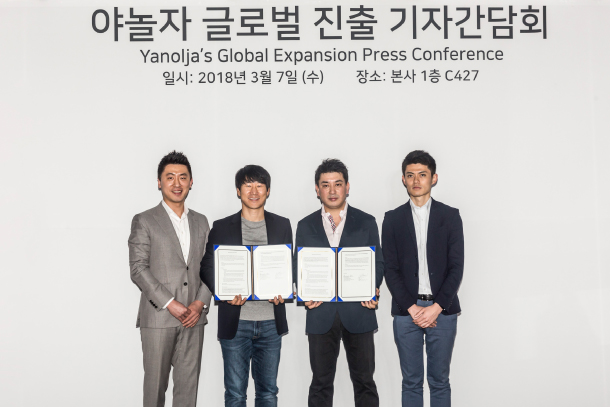 
Yanolja, an online platform for hotel reservations, aims to expand abroad this year starting with Japan, and on Wednesday signed an exclusive partnership with Rakuten Lifull Stay, a travel affiliate of the country’s e-commerce giant.

Established in 2005, Yanolja is one of Korea’s most successful start-ups. It spread its name by establishing a cheerful brand image and gained users’ trust in an industry once perceived as dodgy.

Yanolja has the widest network for lodging reservations in Korea and also operates a motel chain with more than 120 branches nationwide.

Its partnership with Rakuten Lifull Stay is the first major foray outside Korea. Yanolja is the fifth global partner for Japan’s leading online travel company, aimed at bringing more tourists to Japan.

The two companies will share information on their platforms on hotels, motels and smaller lodging operations that foreigners may have trouble making reservations with.

Moreover, Japan will start allowing private home renting under a overhauled law in June, and Korean users will be able to reserve them through Yanolja by the third quarter. Yanolja’s services will be available to Rakuten’s Japanese customers by the fourth quarter.

“Until now, our drive was to make qualitative improvements in small and mid-sized lodging facilities in Korea,” said founder and CEO Lee Su-jin at a press conference held Wednesday in Gangnam, southern Seoul. “Now, we’re stepping into the global market and the larger plan is to continue breaking down the boundaries of what we’ve done in the past.”

The partnership will let the two reservation platforms share not only accommodation inventories, but also content and information on what tourists from each countries can enjoy when traveling.

For Yanolja, the partnership is intended to expand its business from mere reservations to a platform that offers comprehensive content to help users enjoy trips.

Also on Wednesday, Yanolja launched a new brick-and-mortar lodgings brand, Heyy. The concept is that each unit will incorporate characteristics of regions in which it is located or the preferences of the tourists that visit the area.

For example, “Heyy Joy” will be an accommodation for backpackers that provide beds instead of individual rooms, while “Heyy Mania” will target bicyclers and outdoor activity enthusiasts.

It will have parking spaces for bicycles and offer amenities like repair tools. Travel information and discount coupons for nearby attractions will be part of Heyy’s localized services.