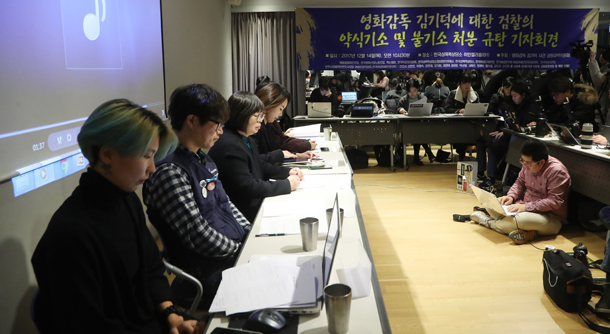 A joint committee of women’s advocates and lawyers held a press conference on Dec. 14, after prosecutors only indicted Kim on assault charges on Dec. 7, and not for sexual harassment. The actor who brought the charges against Kim was present at the conference, calling for justice to be served. Kim denies the allegations brought against him. [YONHAP]

Leading Korean art-house film director Kim Ki-duk of “Pieta” (2012) may have earned international acclaim for his movies, but the auteur’s oftentimes disturbing and controversial features have caused pain to many actors and crew members who have worked with him, according to a report from MBC’s “PD Notebook.”

During the show, which aired Tuesday night, three anonymous female actors revealed incidents of sexual assault committed by Kim while they were working on his movies. One of them filed a complaint in January 2017 against the director for forcing her to shoot explicit scenes for “Moebius” (2013) by slapping and coercing her to touch another actor. The court indicted Kim on a summary offense in December 2017 and fined him a five million won ($4,700) for assault.

In an interview on the show, the actor said she was called into Kim’s room while working on the film, where Kim was persistent in demanding that the two have sex despite her refusal. Kim described having a sexual relationship as the “trust” between the filmmaker and the actor, according to her.

When she tried to get other victims and witnesses to testify on her behalf, they refused in fear of the influence Kim has in the film industry. 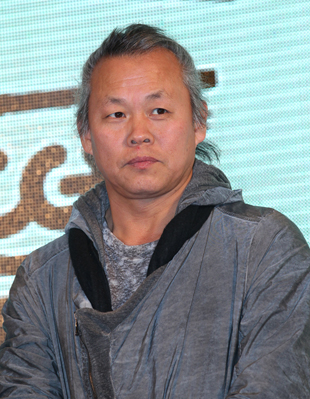 Another actor told the show about the inappropriate comments the director made while working with him.

“[During a meeting with Kim at a cafe,] he asked me whether he saw my breasts during the audition, and asked to see them. He also told me that he imagined that my breasts looked like peaches, and asked about the color of my nipples,” she said in the interview. He also asked her what she thought the shape and size of Kim’s penis was. Pretending to go to bathroom, the actor ran away from the meeting.

“[When I told my then-agency about what happened], the company seemed to care more about the fact that I was no longer appearing in Kim’s film, instead of what I had experienced.”

There are many more victims who experienced worse, said the third anonymous actor on the show. “Those who are speaking out are testifying because [the level of assault is not as extreme].”

The actor claimed that it wasn’t just Kim who raped her, but also veteran actor Cho Jae-hyun, a frequent star in the director’s movies. She said that even Cho’s manager attempted to have sex with her, offering to pair her up with Cho in his next films.

“They were like hyenas [hunting] for women to rape… Kim and Cho called and banged on my door every night [during the shoot]. It was like hell.” She gave up acting following the abuse.

Despite the slew of testimonies, Kim, the first Korean director to win major prizes at the Venice, Berlin and Cannes film festivals, is saying otherwise.

At the Berlin International Film Festival in February, where he presented his feature “Human, Space, Time and Human,” Kim told reporters, “Although my movies are violent, my life isn’t. I hope [you] don’t make a presumption on my character based on my films.”

While defiantly refusing to apologize to the former “Moebius” star for the violence the court has acknowledged that Kim had imposed, the filmmaker said, “There are two important factors I consider when making a movie. The first is safety. Nobody should face any pain or damage. The second is respect. Regardless of how grand a film is, actors and staff members shouldn’t be insulted or mistreated.”

The director responded to requests for comment from “PD Notebook,” defending himself through a long text message he sent to the production team, which read, “Although I may have forcefully kissed, I never forced [anyone to do] something more than that.”

“That is total nonsense,” one of the actors said after reading Kim’s message.

Cho, who has starred in Kim’s “Moebius,” “Bad Guy” and “Crocodile,” decided to step away from all his activities last month when allegations of sexual abuse involving the actor exploded.

In a statement, the actor said he had “lived a wrong life” and that he will “step down from everything, and spend time looking back on my life, atoning for the victims.”

On “PD Notebook,” Cho said through a phone call that 80 percent of the rumors on the internet [before the allegations were reported in the media] were inaccurate. “Some [information] is even understated,” said Cho.

When the Korea JoongAng Daily asked Lee Sang-wook, a representative from Cho’s agency CS Actors, about what Cho meant by “understatement,” Lee said, “Cho will say what he has to say during an investigation if there is one.”

“There are so many victims who have suffered from [the sexual misdeeds] of Kim Ki-duk and Cho Jae-hyun,” said one of the actors.

“They seem to have successfully climbed their career ladders while the victims have suffered… I think they should be stopped from doing what they like and spend the rest of their lives reflecting on what they have done.”

Meanwhile, Soohyunjae, a theater company established by Cho, will close down after all of its plays that are currently being staged come to an end.

Cho established the company in 2014 and has produced numerous hits.