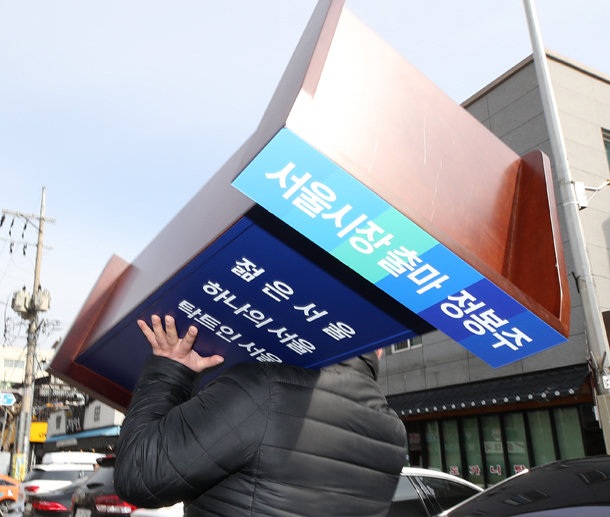 A worker carries away a podium set for Chung Bong-ju to announce his bid to run for Seoul mayor at a press conference on Wednesday morning in Mapo District, western Seoul. [YONHAP]

After a reporter accused former Democratic Party Rep. Chung Bong-ju of sexually harassing her in 2011, the former lawmaker, who was about to announce his bid to run for Seoul mayor in a press conference on Wednesday morning, canceled the conference.

“He approached me suddenly [in a hotel cafe] then hugged me and pushed his face toward mine to kiss me,” the reporter, who said she was a college student at the time, told Pressian, a liberal online newspaper. “I remember running out and getting on the subway because I was still a student and didn’t have money to get a cab.”

The reporter said she met Chung for the first time at a lecture at a university in November 2011. She told Pressian that after asking Chung to take a photo with her and her friend at the end of the lecture, Chung told them he would be giving a lecture at their university, too. 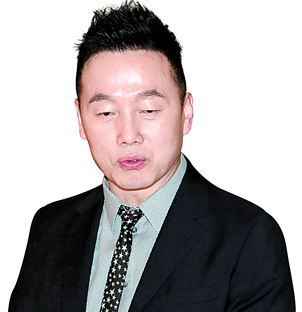 “He gave me his business card and said ‘I like to communicate with students, so do not hesitate to contact me at any time,’” she told the Pressian. “He did respond to messages and it was the first time I had networked with a politician. So we kept in touch.”

After a following lecture at the reporter’s university, she, her friends and Chung had dinner together, the online newspaper said, at which point they became closer.

“She said, ‘He told me to send him some of my writings, telling me he used to be a reporter, too,’” reported Pressian.

“But what seemed initially an act of kindness turned into something else, as he kept texting her ‘What are you doing’ or ‘Are you busy’ and gave her a different cell phone number from his official one on the business card to contact him. She said she stopped taking calls from him.”

She said she saw him for the last time on Dec. 23, 2011, at a room in the cafe on the first floor of Kensington Hotel in Yeouido, western Seoul, Pressian reported.

“He texted me that he wants to see me one last time before he is jailed,” she told the news outlet. Chung was sentenced to one year in prison for violation of the Public Official Election Act on Dec. 22, 2011. “I felt bad for him so we decided to get tea.”

That’s when Chung tried to kiss her, according to the reporter.

“After he got out of jail in 2012, at which point she had graduated from her university and become a reporter, he tried to get in touch with her, saying, ‘I have something to tell you as a politician to a reporter,’” Pressian said. “She didn’t see him.”

When asked what made her go public about what she said happened, she said, “I couldn’t let someone like him run for Seoul Mayor. The mayor must work for the safety of the citizens. This is a dangerous man to be given such a task.”

The online newspaper said Chung, who has been married since 1995, plans to sue for character defamation.

Chung was reportedly unable to be reached by his aides.

An increasing number of politicians and prosecutors are embroiled in Korea’s Me Too movement, which has taken off in the past month after prosecutor Seo Ji-hyeon came forward in late January with a story of being groped by a superior.

South Chungcheong Gov. An Hee-jung, a former aide to the late President Roh Moo-hyun and a presidential contender last year, resigned Tuesday after his secretary said he raped her multiple times. An’s party, the ruling Democratic Party, expelled him Tuesday.

The Supreme Prosecutors’ Office, which put together a team last month to probe the allegations, announced on Wednesday that it requested the Ministry of Justice to dismiss the chief prosecutor who is accused of sexually harassing two female prosecutors.