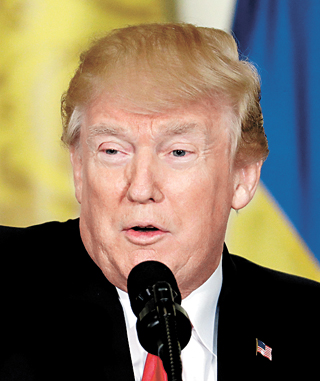 U.S. President Donald Trump said he believes North Korea is “sincere” about talks with the United States on Tuesday and hopes for a peaceful breakthrough after Pyongyang signaled it is up for discussions with Washington about giving up its nuclear weapons.

Asked whether North Korea’s willingness to talk is sincere or an effort to buy time to develop its nuclear weapons, Trump told reporters during a joint press conference with Swedish Prime Minister Stefan Lofven at the White House, “I think that they are sincere, but I think they’re sincere also because the sanctions and what we’re doing with respect to North Korea,” which includes “the great help that we’ve been given from China.”

He added about China, “And they can do more, but I think they’ve done more than, certainly, they’ve ever done for our country before,” saying that it has “been a factor.”

North Korea expressed its willingness to have candid talks with the United States to discuss denuclearization and normalization of ties, and also promised a moratorium on nuclear and ballistic missile tests during the talks, according to Chung Eui-yong, the head of the Blue House’s National Security Office, Tuesday.

Chung led a South Korean delegation to Pyongyang Monday and Tuesday as President Moon Jae-in’s special envoy and met with North Korean leader Kim Jong-un. He is set to kick off a four-day trip to Washington Thursday to brief the Trump administration on the results. He is bearing an undisclosed message from the North to be delivered to the United States.

Responding to a reporter’s question on the possibility of a peaceful breakthrough with North Korea, Trump said, “Well, I hope so. I want to see what happens. We’re in very close contact.”

He added that such a breakthrough would be a “great thing” for North Korea, the peninsula and the world.

“For many, many years, this should have been taken care of,” he said. “It shouldn’t have been waited. But we’ll get it done.”

When Trump was asked whether he believed North Korea is prepared to give up its nuclear weapons, he replied, “They seem to be acting positively, but we’re going to see.”

The president said that he is “willing to go either way,” which insinuates dialogue or military action, but added, “Hopefully, it’s going to be the proper way.” He elaborated, “The proper way is the way that everybody knows and everybody wants,” indicating a diplomatic solution over a military option.

On whether he is willing to meet North Korean leader Kim, Trump only said, “We’ll see what happens.” Likewise, he did not clarify whether there would be any preconditions to hold direct talks with the North, or if it would be enough for the North to suspend nuclear and missile tests.

He said, “I think that their statement and the statements coming out of South Korea and North Korea have been very positive.”

Trump gave himself “tremendous credit” for the success of the PyeongChang Winter Olympics last month.

“When [North Korea] came in out of the blue and they said, ‘We’d love to participate in the Olympics,’ it made the Olympics very successful,” said Trump. “So I thought North Korea was terrific. They came out - they went into the Olympics, they went in with good spirit, they did well. Let’s see if we can carry it over.

“We may carry it over,” he continued, on the spirit of engagement. “It’s a very tenuous situation. It’s going to be very interesting to see what happens.”

“Possible progress being made in talks with North Korea,” Trump tweeted earlier Tuesday in a cautiously optimistic tone. “For the first time in many years, a serious effort is being made by all parties concerned. The World is watching and waiting! May be false hope, but the U.S. is ready to go hard in either direction!”

“Maybe this is a breakthrough,” said Coats. “I seriously doubt it…Hope springs eternal.”

Coats pointed out that the regime’s leader Kim Jong-un has repeatedly stated that he would not give his nuclear and missiles program. “He sees that as existential to his regime’s survival, and to his own survival.

“It’s too early to make a clear assessment,” he added. “We need to hear from our interlocutors, as well as South Koreans, to discuss what they have discussed,” with the North.

He said, “I have very low confidence on what their intent might be. If their intent is for denuclearizing, we have seen no evidence to that decision.” Coats recalled a “history here of watching this movie a couple of times before, with both Republican and Democratic administrations, and the frustration of getting into talks with North Korea and not succeeding, buying them time to do what they want to do.”

In contrast, Sen. James Inhofe, a Republican from Oklahoma and member of the Committee on Armed Services, indicated that he is more optimistic about North Korea’s recent gesture, noting that Kim Jong-un is coming out of years of “a policy of appeasement from the Obama administration.”

Inhofe said Trump “responded in a very, very straightforward way,” to North Korean leader Kim’s threats and then, “all of a sudden the phone call went down to South Korea, saying, ‘Yeah, we want to participate with you in the Winter Olympics.’”

“And I thought, that happening, and then of course what happened last night, is something that is kind of unprecedented,” said Inhofe, a staunch conservative. “And I want to think that this aggressive behavior of our president is going to have a positive effect on [Kim Jong-un].”

South Korea’s Chung and Suh Hoon, director of the National Intelligence Service (NIS), head to Washington Thursday and the Blue House said Wednesday that it is in the process of fine-tuning the details of their schedule.