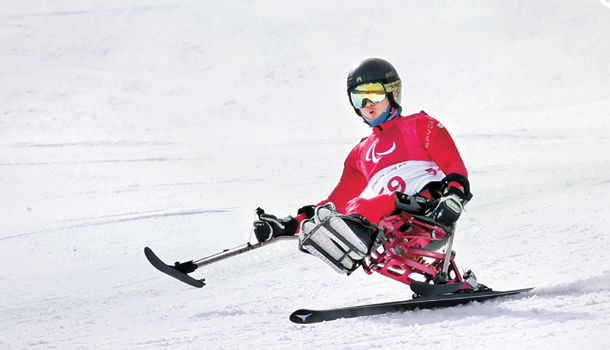 Han Sang-min skis down a slope at the Jeongseon Alpine Centre in Jeongseon County, Gangwon, on Wednesday during a practice run ahead of the PyeongChang Winter Paralympics, which start today. [YONHAP]

The 38-year-old skier first took up the sport in high school upon recommendation from a teacher after polio paralyzed the lower half of his body at age 1. At the 2002 Winter Games in Salt Lake City, he won silver in the men’s giant slalom, sitting. To this day, it remains Korea’s only medal in skiing.

In alpine events at the Paralympics, skiers race down the slope on sit-skis or mono-skis. Rather than poles, para-skiers use outriggers that help assist with balance, controlling speed and changing direction.

When Han started, there were no professional coaches in the country for para-alpine skiers. He was working largely on his own. To keep his body in shape during the summer months, Han plays wheelchair basketball, even winning gold at the 2014 Incheon Asian Para Games.

Things weren’t always easy for the Paralympian. At the 2006 Winter Games in Turin, Han fell just before he reached the finish line. In the 2010 Vancouver Paralympics, the harsh weather kept him from medaling. For Sochi 2014, Han failed to make the cut altogether.

Now, PyeongChang is giving Han a shot at redemption. “I won silver at Salt Lake City in 2002,” he said. “I want to repeat that glorious moment again.”

But preparations have been far from smooth. While training for a World Cup event in Calgary, Canada, last month, Han suffered a severe injury to his left shoulder. The skier had already undergone three shoulder surgeries prior to his most recent injury.

The setback has only made him more determined to medal in PyeongChang. “This may be my last Paralympics,” Han said. “Whichever medal I win, the value of them will all be the same.”

Han turns 39 in May and senses that his skills may not be on par with his previous records for a shot at Beijing 2022.

In sitting events, if the result ends as a tie after the classification factor calculations based on impairment are made, the athlete who first crossed the finish line is the winner.

Han has been practicing under the guidance of Coach Kim Nam-jae, whom he met at the 2006 Turin Paralympics.

“The world ranking for this year’s competition is not that significant for Sang-min,” Kim said. “If he puts on his fighting spirit, I think he will be able to medal.”

“Everything feels surreal since it is my first time competing at the Paralympics in eight years,” Han said. Though it’s been a while, the skier believes “things will change once I’m back at the familiar course at the Jeongseon Alpine Centre.”

“I hope to see good results at the super events and downhill,” he said.