Athletes to watch out for as the Games begin

Athletes to watch out for as the Games begin

Becoming the first country to host both the Summer and Winter Paralympics, Korea is set to continue the success of the PyeongChang Olympics starting today.

The 2018 PyeongChang Paralympic Winter Games, set to run from today until Mar. 18, will offer a record 80 gold medals, 78 in snow events and two in ice events. 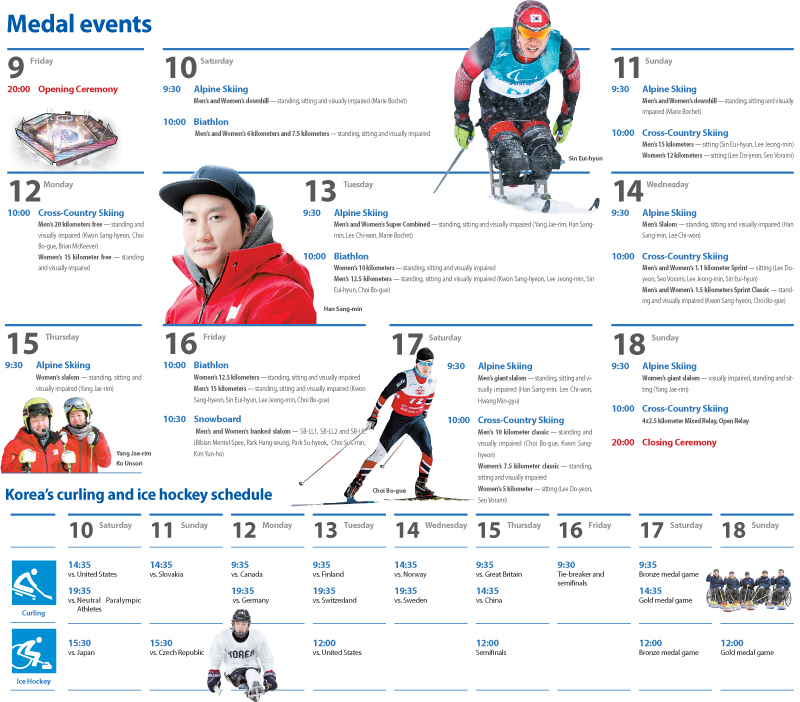 Of the participating countries, the United States sent the biggest delegation - 68 athletes. Some countries will bring noticeably smaller teams. North Korea will bring just two athletes, marking the first time in history that the country will compete at the Winter Paralympics. Georgia and Tajikistan will also make their debut.

There will be 30 athletes from Russia competing under the name “Neutral Paralympic Athletes,” and China, the host of the 2022 Games, has 22 participants.

French alpine skier Marie Bochet, who has already won four gold medals at the 2014 Sochi Paralympics, will return to defend her title. Bochet won gold in all but the giant slalom race in Sochi, leaving quite an impression in her Paralympics debut.

Canadian Paralympic veteran cross-country skier Brian McKeever is also one to watch. McKeever will compete at his fifth Paralympics. Having competed since the 2002 Paralympics in Salt Lake City, he has won 10 gold medals, two silver and one bronze throughout his career.

Proving that age is just a number, Dutch snowboarder Bibian Mentel-Spee, 45, enters the PyeongChang Paralympics as the defending champion in snowboard cross in SB-LL from the 2014 Sochi Paralympics.

Ice hockey and wheelchair curling teams compete in tournaments with games taking place throughout the Paralympics. The schedule below outlines the fixtures for the Korean teams, as well as the finals.

The main calendar outlines the medal games featuring Korean and other notable athletes during this year’s Winter Paralympics.