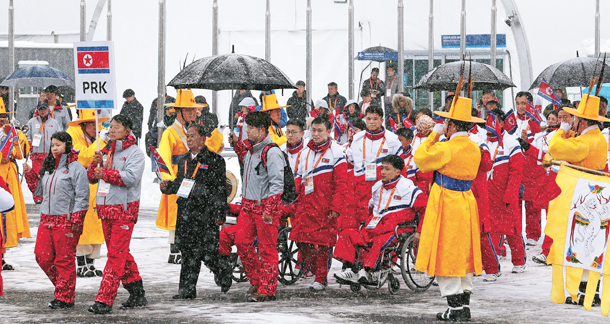 A successful sequel can be a difficult thing to pull off, but the 2018 PyeongChang Winter Paralympics, starting today in three locations across Gangwon, looks set to continue the legacy of last month’s Olympic Games.

Over the next nine days 570 athletes from 49 countries, the most athletes to ever compete at a Winter Paralympics, will descend on Pyeongchang County, Gangwon, and the surrounding area to compete on snow and ice, pushing themselves to the limit in the pursuit of an elusive gold medal.

Heading to the Games with 36 athletes, Korea hopes to win its first-ever gold at the Paralympics, while its goal for the overall medal standing is to place 10th.

Although the events at the Paralympics are similar in concept to Olympic sports, the rules are noticeably different. Paralympians are assigned categories based on their impairment. These classifications determine which athlete is eligible to compete in which event and how they are scored. As different sports require different physical activities, classifications are specific to each style of event.

Like the Olympics, the Games will begin and end with official ceremonies.

The opening ceremony, which begins tonight at 8 p.m., will officially declare the start of nine days of sports and spectacle, and at the center of it all are the athletes.

“I have always been a sport addict. Until [I was] 16 years old, I practiced gymnastics at a high level, but with my handicap I always experienced difficulties with the beam that I couldn’t see properly. I used to fall a lot,” explained Eleonor Sana, a visually impaired alpine skier from Belgium.

In visually impaired events, athletes race with a guide runner. The guide wears a brightly colored vest with the letter “G” emblazoned on it and both the guide and the athlete have wireless communication devices attached to their helmet so they can communicate to navigate the course.

In these events, trust between the athlete and the guide is crucial. As a result, if an athlete wins a medal, their guide also gets one - providing they raced together in every heat.

Sana found a guide she could definitely trust - her sister, Chloe.

“Chloe, my sister, has been my guide since the beginning [in 2014]. We have a strong relationship based on mutual trust,” she explained. “It is of course a special bond. We know each other very well and have very good communication. We don’t hesitate to be honest to each other. We don’t avoid confrontation sometimes. It is an advantage.”

Sana isn’t the only athlete competing at the Games. For Belarusian Paralympian Liudmila Vauchok, the four years between Winter Games is just too long to wait.

“Sport is my whole life,” explained Vauchok. “I participate both in summer and winter sports - Nordic skiing and rowing. My first Paralympics was in 2006 in Turin. I won four medals - one gold, three silver. In 2008 in Beijing I was second in rowing. In 2010 in Vancouver I got two gold and two bronze. In 2012 in London [I got a] bronze medal in rowing.”

Cross-country skiing, or Nordic skiing, involves athletes crossing a snow-covered field in the shortest possible time frame. Athletes are categorized into sitting, standing and visually impaired for the sport, with a total of 20 gold medals available across the different distances.

The PyeongChang Paralympics will see the return of snowboard, first introduced at the 2014 Sochi Games. It has three different classifications depending on which limbs an athlete’s impairment affects.

“I love what I do and so I don’t have to look far for motivation,” said Ben Moore, a British snowboarder. “I represented Great Britain in my first season and I’ve never looked back. I’m now one of the first para-snowboarders to represent my country in this sport at a Paralympic Games, which I’m really excited about.”

Moore isn’t the only snowboarder excited about showing off what the sport has to offer at the Games.

“I have been doing sports all my life so it is a part of my DNA,” said Daniel Wagner, a Danish snowboarder and the only athlete from Denmark competing at the Paralympic Games. ”I want to use my disability… It is also really important for me to inspire other people, disabled or able, and I hope I can do that [by] showing that the impossible is possible.”

For some athletes, the road to the Paralympics has not been easy.

“In 1998 I had a car accident. A drunken man crashed into my car and my left leg was amputated above the knee,” said Gregory Leperdi, an Italian ice hockey player. “Right after the accident I wanted to learn how to run again and got involved in track and field, where I obtained a couple of Italian records - [those in] Javelin and Pentathlon [are] still unbeaten.

“In 2004, when Italy was setting up the first Italian Para Ice Hockey [team for the] Turin 2006 Paralympics, I was asked to try this sport,” he said. “Since then I’ve never stopped and participated in four Paralympic games, six Group-A World Championships and four European Championships, becoming the European Champion in 2011.”

In para-ice hockey, players compete on a sledge and rely on their upper body strength. As such, they use two hockey sticks that are about 80 to 90 centimeters (31 to 35 inches) shorter than ice hockey sticks used in the Olympics. Ice hockey, like wheelchair curling, also takes a physical toll as players compete regularly throughout the Games in a tournament, rather than a single event.

“In 2001 she fell from the roof of her university residence and sustained spinal injuries,” reads her profile on the PyeongChang Paralympics website. “She was following the news of the Sept. 11 attacks in the United States, but her television was receiving a bad signal reception. She climbed on to the roof to adjust the position of the antenna as she had done a number of times before, but on this occasion she slipped and fell.”

“The biggest challenge for me was to become a wheelchair user,” Vauchok said. “As I was running before the trauma it was extremely complicated for me to realize that I would never run again. But my family supported me. Now I have a daughter, she is 6 years old and this is the main victory in my life and the biggest motivation.”

The Paralympic motto, “Spirit in Motion,” is a reference to the will and drive of the athletes. For many Paralympians it is important that they pass this passion on to future generations.

”When you are a para-athlete defiantly [do] not take no for an answer,” explained Team GB’s Wagner. ”Nobody knows the right answer, so it is better to try and then maybe get to a better answer.”

For Vauchok, the message is simple, “believe in yourself and invent something new, because much depends on us.”