A conversation with a bartender

A conversation with a bartender 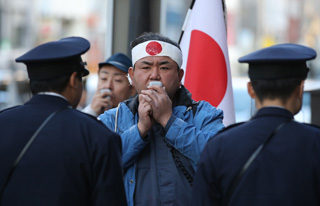 Members of a Japanese right-wing group protest the South Korean government’s decision to scrap the earlier agreement between Seoul and Tokyo on the settlement of the sex slave issue last December. [YONHAP]


Recently, I visited a small Japanese city for work and went to a bar near my hotel. I wanted to talk to some local residents.
When the bartender learned that I was a South Korean, he talked about the PyeongChang Winter Olympics. The conversation was going well as we talked about the friendship between speed skaters Lee Sang-hwa and Nao Kodaira. Suddenly, the mood changed when we moved on to North Korea. He asked, “Why does South Korea want to be reunited with North Korea?”

He seemed to be unhappy that South Korea is trying to engage in talks with North Korea, which aims missiles at Japan and the United States. I thought he didn’t have much knowledge about South Korea. He seemed to be convinced when I told him that the Koreas had been one country until some 70 years ago and Koreans want to be united again.

Then he asked another question. “Why can’t Koreans forgive the ‘comfort women’ issue?”
It is not common to ask about wartime sexual slavery so directly in Japan. He said, “It was wartime, and not only Japan but other countries had a similar system.” He seemed to think that it was nothing to apologize for. He repeatedly emphasized that future generations should not be held responsible for past wrongdoings.

In fact, his perception of Korea was nothing extraordinary. News about Korea on Japanese television is mostly negative views on North Korea and “comfort women.” Japanese media often argue that the historical issues are fabricated. I can feel that the understanding of Korea has worsened.

Korea’s East Asia Institute and Japan’s NPO Center survey the perception of citizens in the other country every year. Last year, 75.8 percent of Korean respondents said the resolution of the comfort women issue was the prime task for the development of Korea-Japan relations, while only 42.6 percent of Japanese shared the view. In contrast, 21.2 percent of Japanese respondents — twice more than Koreans’ 10.9 percent — said that cooperation on the North Korean nuclear issue is important. The significant discrepancy in understanding is obvious from the numbers.

Lately, it is not hard to find books with unfriendly views on Korea in bookstores in downtown Tokyo. Books like “Korea, a Senseless Nation” and “PyeongChang Olympics and Korea’s crisis” focus on inciting anxiety. How about Korea? There are no books encouraging hatred towards Japan, but the anti-Japanese sentiment is certainly stronger than before. Since Korea was a victim of imperialism, anti-Japanese sentiment is justified. It is regrettable that efforts to understand each other accurately and decrease the differences cannot be found.