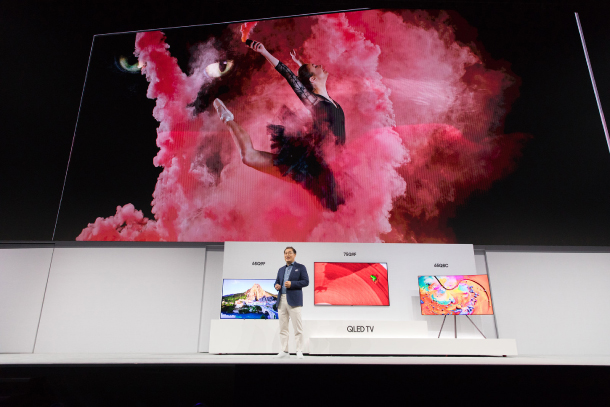 Samsung Electronics unveiled an upgraded lineup of its QLED televisions powered with artificial intelligence technology at a launch event in New York on Wednesday.

The launch signals the start of a battle against LG Electronics in the premium television segment after the Korean rival released its latest high-end displays earlier this week.

Samsung introduced 16 products in four QLED series: Q6F, Q7F, Q8F and Q9F. Each series comes in four size variations ranging from 49 inches to 88 inches. Televisions that are larger than 75 inches are categorized as big-screen TVs.

The electronics giant highlighted the fact that it produced big-screen televisions for all four series and said it hopes to expand its presence in the premium television market with these larger screens.

One notable feature of Samsung’s new QLED televisions is an “ambient mode” that turns them into interior decorating pieces when not in use. In ambient mode, the television can display photos, the weather or news while playing background music.

Owners can even make their televisions look like a frame floating in the air by setting the wall’s texture as the background image. Translucent cable cords add to the effect.

Another significant feature: artificial intelligence powered by Bixby, Samsung’s answer to Siri. Users can ask Bixby to change the channel, search for videos or look up information online. The device is also capable of understanding the user’s taste and can recommend specific channels or shows.

Equipping televisions with artificial intelligence is not new, especially with the boom of speakers and set-top boxes incorporating the technology. Television manufacturers are now competing with each other on the quality of their AI, a break from the past when color definition was the main deal-breaker. The competition in color technology has reached a point where there is not much space left for dramatic advances.

The new models are compatible with the company’s “magic remote control.” Users can vocally control the television through a microphone on the remote control and use it as a mouse on the screen.

LG’s determination to win ground in this battle shows well in the fact that despite upgraded functions, the products’ prices were slashed around 20 percent compared to its OLED TVs released last year.

According to research firm IHS Markit, LG and Samsung Electronics placed second and third in the premium TV market last year with 33.2 percent and 18.5 percent share. The market leader was Sony with 36.9 percent.