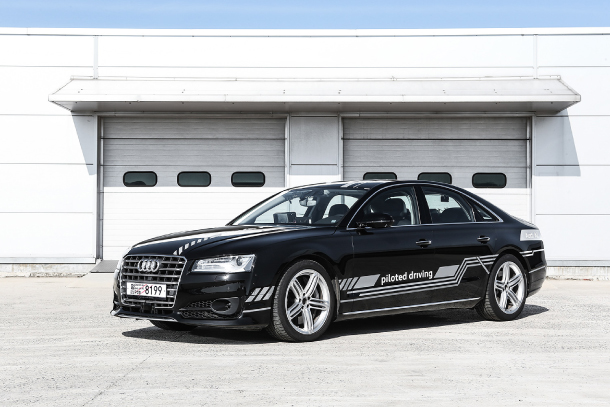 The government has granted a temporary permit to Audi Volkswagen Korea to test run an autonomous A8 on Korean roads. [AUDI VOLKSWAGEN KOREA]

An adapted version of Audi’s A8 sedan will be the first self-driving import vehicle to run on local roads in Korea.

Audi Volkswagen Korea said Thursday that it has received a temporary license from Korea’s Transport Ministry to test its level-three autonomous car functions on Korean roads, becoming the first import automaker to receive such an approval.

“It’s all the more meaningful for us to be the first imported automaker to test automated driving functions also on the public roads in Korea,” said Rene Koneberg, Audi Volkswagen Korea’s managing director.

“Constant test drives will enable us to build up data on local roads and traffic environment, which will be used as the basis for further developing higher levels of automated driving,” the director added.

Autonomous cars are given a level between zero and five, with zero being a standard manual car and five a fully autonomous car.

A level-three vehicle still requires a driver to be in the car and intervene if necessary, but most functions can generally be handled autonomously.

The Korean unit of the German automaker said it will demonstrate its level-three Traffic Jam Pilot system on Korean roads and collect related data to further enhance its autonomous driving function.

Traffic Jam Pilot only operates under speeds of 60 kilometers per hour (37 miles per hour), according to the company. It includes lane keeping assist, predictive adaptive cruise control and front collision warning systems.

The A8 will also be topped with zFAS, Audi’s central driver assistance controller. It acts as the brain of the autonomous car, analyzing images and objects detected around the vehicle in real time.

Korea’s Ministry of Land, Infrastructure and Transport has so far licensed 40 vehicles from 17 domestic manufacturers in the automotive and IT sectors. Hyundai Motor runs 15 test vehicles, while Samsung Electronics runs two.

“The ministry informed [Audi Volkswagen Korea] to not record data on Korean maps and security facilities,” a ministry official said. “It is not a necessary step for domestic companies, but since foreign companies have to report back to their headquarters, we made sure that such data would not get leaked.”

Audi Volkswagen Korea was banned from selling vehicles for the past year and a half following the diesel emissions scandal.

The A8, which will be used for the self-driving tests, is one of the models that still cannot be sold in Korea.

An Audi official explained that “collecting data on Korean roads” is the objective of the latest procedure and the test run is not related to its future sales plans.

The official said the company will test run the A8 in K-City, a test site for autonomous cars in Hwaseong, Gyeonggi, as well as other local roads.