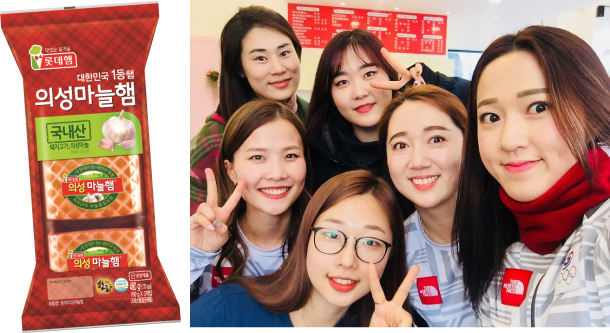 Four of the five members of Team Kim were raised in Uiseong County, North Gyeongsang.

Uiseong is famous for the garlic produced in the area, so much so that during the Games the local press started to nickname the team the “Garlic Girls” - much to their chagrin.

“We internally decided to appoint the team as the product’s official model earlier on and first contacted them in mid-February to discuss the matter,” said a Lotte Foods spokesman.

Under the contract, Lotte Foods will sponsor the team until 2019, during which the members will appear on advertisements for Uiseong Garlic Ham.

As the garlic-producing area is now more famous than ever, the food company plans on expanding its Uiseong lineup in the future.

The company has worked with the county since 2006 and has purchased more than 100 tons of garlic every year from the farmers there.

It has also offered scholarships to students and held events and camps in the area.

Released in 2006, the garlic ham was the first local ham product to come in pieces rather than a single bar. It is now the industry leader with a market share of more than 50 percent as of 2016, when the latest data was available.

The news came after Wednesday when LG Electronics announced that the women’s curling team will be the new face of their cleaning robot.