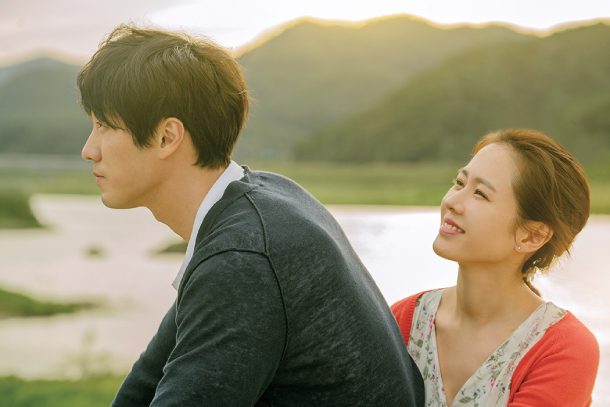 Adapted from a Japanese romance novel of the same title, the heart-wrenching love story “Be With You” stars So Ji-sub, left, and Son Ye-jin. [LOTTE CINEMA]

Heartthrobs So Ji-sub and Son Ye-jin are returning to the silver screen in the upcoming romance flick “Be With You.”

Adapted from a Japanese novel written by Takuji Ichikawa, the film follows a deceased wife Su-a (Son), who miraculously returns to her still-bereaving husband U-jin (So) and son Ji-ho (Kim Ji-hwan) during the monsoon season. After a moment of pleasant shock, the two realize that Su-a does not recognize who they are.

Curious to know about her love story with U-jin, the female protagonist gradually learns about the time she spent with her husband and son before her unfortunate death. But by the time that she realizes how much U-jin and Ji-ho mean to her, the monsoon season is nearly over and Su-a needs to return to the afterlife.

The popular tale was made into a movie in Japan in 2004.

“I first learned about the story through the novel instead of the movie. [Through my movie], I hope to deliver the comfort I received through the novel to the audience,” said director and writer Lee Jang-hun during a press event held in eastern Seoul on Tuesday. “After mulling over what love is for a long time, I eventually came to the conclusion that maybe just being beside [the one you love] is enough. This is the message I wanted to include in the film.”

The filmmaker further explained that he did his best to unfold the tale in a way that does not destroy the original because he was “overwhelmed by the [success] of the original and how well it was received.”

Son, known for her roles in romance movies like “A Moment to Remember” (2004) and “The Classic” (2003), said the biggest challenge for her was looking natural on screen.

“I was constantly mulling over how to naturally bring out the feelings that can be expressed from pure love after many years [away from romance films],” said Son.

For So, playing U-jin was enjoyable because the character resembles who he is in real life.

“Deficient, humorless and careless. These [qualities of U-jin] are very similar to my actual self. So I was happy and was comfortable while shooting the film,” said So.