An Hee-jung accused of rapes by second woman

An Hee-jung accused of rapes by second woman 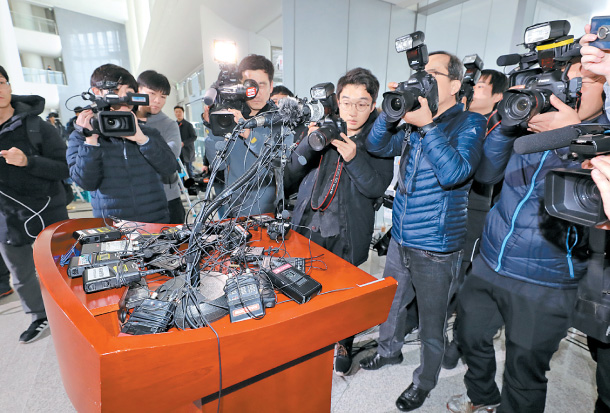 Audio equipment is positioned on a rostrum Thursday in the South Chungcheong provincial headquarters where former governor An Hee-jung was planning to apologize for raping his secretary. The presidential aspirant called off the press conference just two hours in advance, urging the prosecution to summon him. [YONHAP]

A second woman has accused former South Chungcheong Governor An Hee-jung of raping her on multiple occasions since 2016, as Korea’s steamrolling Me Too movement crushes its most powerful sexual abuser to date.

An was considered a strong liberal candidate for the next presidential election.

JTBC, a local cable channel affiliated with the Korea JoongAng Daily, reported Wednesday night that a worker at the Institute for Better Democracy, a political think tank established by An in Mapo District, western Seoul, claimed she was raped by the politician three times: in August 2016, December 2016 and January 2017.

In the most recent instance, the woman claimed she was summoned by the politician to his hotel room in Yeouido, western Seoul on Jan. 18, 2017. As soon as she stepped inside the room, she was forced to have sex with An. It was the third time he raped her, the woman said, and an attempt in July 2016 at a religious facility in Nonsan, South Chungcheong, failed.

An’s sexual advances allegedly began in 2015, when he “pinched” her waist with his right hand during a public gathering in South Chungcheong. The assault was repeated the next day in Seoul.

JTBC quoted the woman as saying she was motivated to reveal An’s sexual misconduct after watching the channel’s interview with An’s secretary last Monday night, in which she accused him of raping her four times and sexually harassing her more often during her eight months working in his office. The second victim did not make an appearance on the 8 p.m. prime-time news show “JTBC Newsroom,” as did the secretary, 33-year-old Kim Ji-eun.

The latest victim said she couldn’t refuse An’s order to meet in private because he was in an “absolute position [of power],” adding she was planning to hire lawyers to file a criminal complaint. Kim filed one Tuesday.

JTBC’s Wednesday report was aired just several hours after An, 52 and married with two sons, announced he would hold a press conference at the South Chungcheong provincial headquarters in Hongseong County, 70 miles south of Seoul, at 3 p.m. Thursday to apologize. It would be the first time he faced the media since being mired in the Me Too accusations.

The press conference was canceled two hours before it was to start. In a text message distributed to reporters by his former chief secretary, An urged prosecutors to call him in.

“I was going to bow my head and apologize to the general public, the people of South Chungcheong, before being summoned by prosecutors,” wrote An. “I canceled the press conference because I thought it was my foremost duty to apologize to the public by showing up for questioning at the earliest date and sincerely cooperating with investigations, at a time when everyone is calling on the prosecution to carry out a speedy probe.”

He continued: “I apologize again. And prosecutors, please hurry to summon me as soon as possible. I will faithfully cooperate.”

An, who apologized for raping his secretary last Tuesday morning in a Facebook post nearly five hours after the interview was aired, made no mention of the second victim. On Tuesday afternoon, An stepped down as South Chungcheong provincial governor and was expelled from the ruling Democratic Party.

An’s former chief secretary, who has been speaking on his behalf, said An hired two to three lawyers as of Wednesday to represent him, and decided not to make any public appearances so as not to inflict any further pain on the first victim.

The Seoul Western District Prosecutors’ Office launched a probe Wednesday night and raided an apartment building in Mapo District, western Seoul, in which An’s secretary claimed to have been raped on Feb. 25. CCTV footage was retrieved to check whether An and Kim appeared at the building that day and whether the politician threatened her or used force, prosecutors said.

An, who lost the Democratic Party primary last year to Moon Jae-in, the current president, has built a strong fan base among liberal voters and was about to end his second four-year provincial governor term this June.

The Institute for Better Democracy, which An led for two years since it was established in 2010, gathered liberal thinkers from various sectors of society for policy research in politics, national security, diplomacy, social development, science and culture, earning itself the reputation of being a nascent election campaign for An’s bid to run for president in 2022, when Moon ends his single five-year term.

Eight staff workers, including the second victim, are known to work at the institute.

An was the most prominent figure to be taken down by Korea’s Me Too movement, which picked up steam when a female prosecutor appeared on “JTBC Newsroom” in late January claiming a former senior colleague groped her at a funeral in 2010.