Gov’t takes action amid Me Too

Gov’t takes action amid Me Too 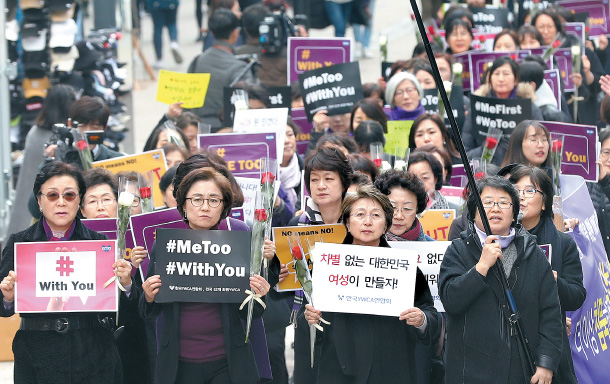 Members of the Korea YWCA, a non-governmental organization promoting women’s leadership and participation in society, march in Myeong-dong, central Seoul, Thursday in purple and black attire to show solidarity with the Me Too movement on the occasion of International Women’s Day. [YONHAP]

The government on Thursday announced a set of comprehensive measures to root out sexual crimes in the workplace as well as the country’s arts and culture circle, following the snowballing Me Too movement in Korea. One measure includes a plan to raise the maximum punishment and extend the statute of limitations for sexual assault cases that are committed in the workplace through an abuse of power.

As clearly seen in recent sexual assault cases involving former South Chungcheong Gov. An Hee-jung and Korea’s theater mogul Lee Youn-taek, Gender Equality and Family Minister Chung Hyun-back said that the measures have been drawn up by seriously taking into consideration that the recently revealed cases are power-based sex crimes.

“Finally, the fury over Korea’s pervasive culture of predatory sexual behavior in the workplace as well as sexual discrimination has finally exploded as can be seen through endless Me Too revelations,” said Chung. “We have to take this beyond merely a movement and spur into action to bring about a change in the social structure as a whole.”

Five ministries - the Ministry of Culture Sports and Tourism, Ministry of Health and Welfare, Ministry of Justice, Ministry of Gender Equality and Family, and Ministry of Employment and Labor - as well as the National Police Agency and National Human Rights Commission of Korea, held a joint press briefing Thursday morning in central Seoul, revealing the comprehensive measure they have discussed and agreed upon during joint meetings held several times since Feb. 27.

Currently, those accused of abusing their power to coerce victims into having sex can be sentenced up to five years in prison and fined up to 15 million won ($13,950), but the government plans to raise it to 10 years in prison and up to 50 million won in fines. The statute of limitations will also be raised from the current seven years to 10.

For culture and arts organizations, which rely heavily on support from the government, the government said it will exclude organizations from receiving government funds if they are found to be negligent is resolving such cases. Currently, if the head of an organization is accused of sexually harassing a staff member, that head can be fined up to 10 million won. But the new measures state that the government will revise the law so that the assailants can be sentenced.

Moreover, to prevent secondary damages such as victims being accused of defamation, the government said it will provide protection for victims. The Ministry of Employment and Labor said it has launched an anonymous report center from Thursday at its website. Despite being anonymous, the ministry said it will instantly conduct investigations, while providing both medical and psychological support for victims. As many of the shocking Me Too revelations came from the arts and cultural communities, the Culture Ministry said it plans to launch a special fact-finding group to investigate such cases in the industry.

Chung said she will head the newly established inter-agency government task force to pursue and follow up on the newly announced plan.

“Although we’ve revealed the comprehensive measures today, it is only the beginning of the government’s attempts to change the whole social structure to root out sex crimes,” she said. “We’ll continue to update the measures and push forward with revising the related bills to make sure no more women fall victim.”

Meanwhile, the Ministry of Education said 10 local publishers have decided to remove from school textbooks content related to artists and writers, including those of poet Ko Un and theatrical directors Lee and Oh Tae-sok, who have recently been accused of sex misconduct.