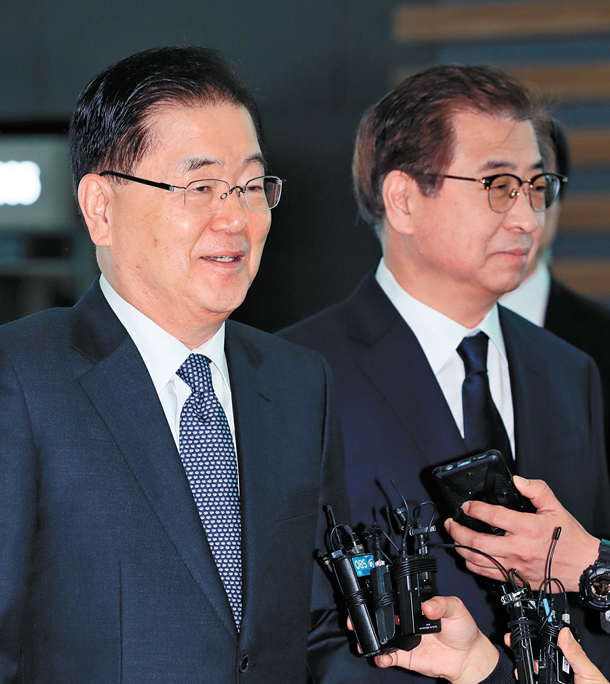 
Korea’s top security officials left for the United States on Thursday to brief the Donald Trump administration about their recent meeting with North Korean leader Kim Jong-un, and to persuade Washington to start talks with Pyongyang.

Chung Eui-yong, chief of the National Security Office of the Blue House, and Suh Hoon, director of the National Intelligence Service, who left for a four-day trip to Washington, were among the five special envoys President Moon Jae-in sent to the North to meet with Kim earlier this week.

“The most urgent priority is facilitating a dialogue between North Korea and the United States,” Chung said at the Incheon International Airport before departure.

But he denied that Kim had offered to suspend the operation of its main nuclear facility in Yongbyon to have a dialogue with the United States, adding, “We are not ready to discuss specifics.”

A 10-member delegation led by Chung returned from their two-day trip to the North on Tuesday and announced several agreements they had reached with Kim.

In addition to a plan for an inter-Korean summit in April, the North expressed its intention to speak “candidly” with the United States regarding the denuclearization of the Korean Peninsula, and promised a moratorium on nuclear and ballistic missile tests during the dialogue period.

Chung has also said he is carrying an additional message from the North to be delivered to the United States, but refused to elaborate.

According to a senior presidential aide, Chung and Suh will have three meetings with U.S. officials to deliver the North’s message and push for a direct talk with the North.

The third meeting will be at the White House, the source said. Chung and Suh are expected to meet President Trump or Vice President Mike Pence on Friday.

The Chosun Ilbo reported that the North’s message is a promise to suspend the development of inter-continental ballistic missiles, quoting a diplomatic source. It also said the North offered to release three Korean-American citizens detained in the country.

Speculation is also high that the North will demand the United States to treat it as an equal party in the future talks.

“The detainee issue is a good incentive to stimulate talks,” Shin Beom-chul, a professor at the Korea National Diplomatic Academy, told the JoongAng Ilbo.

He added, “If the message is about the inter-continental ballistic missile technology, it is only concerning the interests of the North and the United States. It’s not something we should allow.”

After returning from the U.S. trip on Sunday, Chung will brief Moon about the visit. He will then visit China and Russia to brief them and Suh will visit Japan.