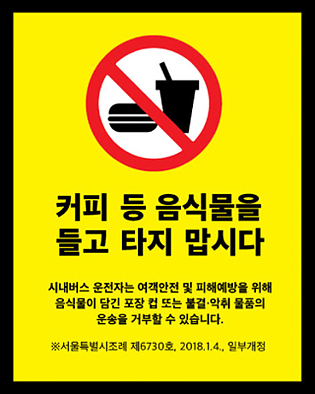 Boarding bus passengers will now be greeted by signs telling them not to bring food and beverages on with them.

The Seoul Metropolitan Government put up signs at every bus stop and bus on Thursday. The signs read, “Let’s not carry coffee or any other food and beverages when boarding the bus. Bus drivers may deny passengers carrying any food or beverages in cups, or other unsanitary and dangerous items to maintain safety and prevent any harm to passengers.”

The decision comes following the city’s revision of an ordinance on bus maintenance and safety, in which bus drivers are “permitted to deny passengers with unsanitary or foul-smelling items,” as well as any other “items that might disturb other passengers,” effective Jan. 4.

But the revision was widely advertised by media and other agencies as only prohibiting takeaway coffee cups and other drinks. Even the announcements on buses said, “Please refrain from boarding buses with coffee or other beverages that may harm other passengers.”

Tteokbokki, spicy rice cakes, were selected as the most common food passengers take onto buses, followed by chips, peanuts, bread, hamburgers, gimbap (seaweed rice roll) and hotteok (a type of Korean pancake filled with honey and nuts), according to a poll of 80 bus drivers carried out by the JoongAng Ilbo, an affiliate of the Korea JoongAng Daily.

With the new signs, however, the Seoul government hopes to clear up the misunderstanding and eliminate food and beverages on buses.

About 38,000 people eat on the bus every day, according to city bus companies. For every bus, an average of five to six people eat on buses.

“But in reality, the number is probably higher,” said a member of the Seoul Bus Union of the Korean Automobile and Transport Workers’ Federation. “They wait until the driver doesn’t notice to eat.”

But some people are not responding well to the city’s new agenda.

“It’s discomforting to know that I can’t carry take-out on buses, which I plan on eating at home,” said one Seoul resident.

Others are also skeptical about the effectiveness of the new signs, since it does not have any legal implications, unlike in other countries such as Taiwan, which places a fine up to an equivalent of $261 on passengers carrying food onto subway trains.

Still, many others approve of the new regulation. In the last two months, the city saw a 20 to 30 percent decrease in passengers carrying beverages onto buses and it hopes to see a further reduction.

“I feel even more car sick on the bus when people carry odorous food onto heated buses [in the winter],” said one social media user, while another wrote, “there is no escape when people eat food that smells on the bus.”

“Many people leave food waste and trash in between seats, and on the windowsill before they leave,” said one driver. “Some even spill it on the floor. But with the new signs, I’m looking forward to cleaner buses.”