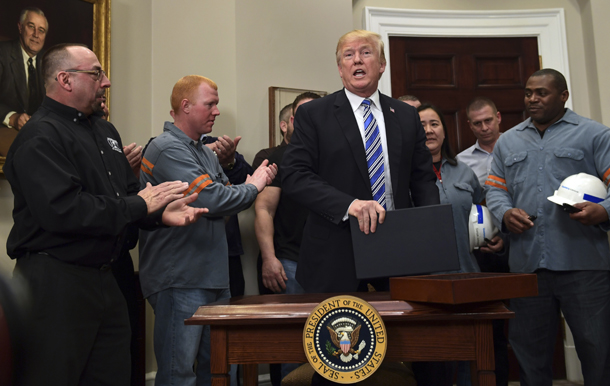 President Donald Trump, center, leaves the Roosevelt Room at the White House in Washington on Thursday following an event in which he signed proclamations on steel and aluminum imports. [AP/YONHAP]

U.S. President Donald Trump last week started a trade war by reviving the long-abandoned Section 232 of the 1962 Trade Expansion Act to levy universal tariffs of 25 percent and 10 percent respectively on all steel and aluminum imports. The provision designed to study the effect of imports on national security targeted key allies, which could undermine the longstanding security alliance. The move is aimed to win voters in the November midterm election, but could exact a heavy price on the international front.

Section 232 of the Trade Expansion Act has been rarely used. The provision triggered investigations 26 times, but only two cases of steel imports were actually cited in antidumping probes in 2001 since the World Trade Organization (WTO) was established in 1995. Those two cases ended up with conclusions that the imports did not hurt national security. The WTO also has a provision on limiting a certain trade if it hurts the national security of the concerned country, but it is not used to protect domestic industry as is Section 232.

The United States has a long history of unilateral trade moves. The Tariff Act of 1930, otherwise known as the Smoot-Hawley Tariff after the names of legislators that sponsored the protectionist policies, raised U.S. tariffs to up to 52 percent on over 20,000 categories. The act is dubbed one of the worst laws in history as it is deemed to have aggravated the Great Depression. Congress in 1934 passed the Reciprocal Trade Agreement to reduce tariffs on a bilateral basis.

Since steel and aluminum are used as basic materials in many manufactured goods, the steep tariffs will raise production costs. Regardless of individual efforts, producers would have to seek government support to rein in rises in production costs. As result, the protectionist action would lead to further protectionist moves by America Inc.

U.S. producers of automobiles, electronics, aircraft, construction materials and industrial components that use steel and aluminum would lobby for antidumping and countervailing duties to keep their product prices competitive against imported goods. Korea Inc., which also exports finished goods like automobiles and electronics, would again be targeted.

The United States is a typical country where enterprises and interest groups use their influence over legislators and government officials to sway trade policies to their favor. As it dug up the long-killed Trade Expansion Act, we can imagine how frequent we will see antidumping and countervailing levies from Washington.

This poses a complex problem to the Seoul government. It cannot campaign directly against it to American voters. It should tell U.S companies, related industry associations, and consumers the effect on production and consumer prices so that they will make the remedial demand on district politicians and later the White House.

At the same time, the Seoul government must come up with thorough plans for counteractions. Countertariffs could persuade the exporters and politicians representing the districts they are based in to persuade the U.S. government to drop the tariffs.
It also must seek a united front with other exporters like the European Union, Canada, and Japan within the WTO. Korea alone cannot fight the United States. It must take concerted action from the convincing stage to WTO suits and countertariffs.

The history of the 1930 tariff clash shows that a trade war is no-win situation. The General Agreement on Tariffs and Trade and the WTO were established as a result. Disaster will repeat itself if the U.S. administration ignores the lessons of past mistakes. The price will be paid not only by Americans but also rest of the world. The U.S administration must pay heed to historical lessons and its citizens must remind their government to do so.

*The author is an economics professor of the University of Seoul.