GM gives in on debt-to-equity plan for local unit

GM gives in on debt-to-equity plan for local unit 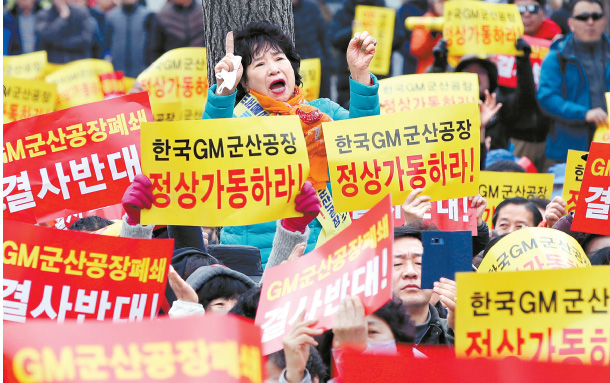 GM Korea Gunsan plant workers, as well as its suppliers and Gunsan residents, protest GM’s threat to close the plant in May in downtown Seoul on Thursday. The protestors are demanding that the Gunsan plant, which has been shut down since last month, be reopened. [YONHAP]

U.S. automaker GM is willing to readjust a $2.7 billion loan that GM Korea has borrowed entirely on its own in return for fresh funding for the local unit by the Korean government.

Additionally it said it would assign production of two new vehicles that are expected to be popular in the global market to GM Korea.

GM is stepping back from its earlier demand that the Korea Development Bank, the second largest shareholder in GM Korea, participate in a debt-to-equity conversion of the $2.7 billion loan.

According to a GM proposal the JoongAng Ilbo obtained on Thursday, GM said it will be willing to convert the loan to equity, which it would hold.

The proposal also includes a plan to invest $2.8 billion in upgrading and installing new equipment for the production of the two new vehicles that will be produced by GM Korea.

GM will shoulder the costs of the restructuring, cut the number of foreign employees working at GM Korea and simplify its leadership structure, a request made by the company’s labor union.

The visit of Engle since Wednesday has raised speculation in the industry that the GM negotiation could bring the situation back from the brink, which would be GM leaving Korea entirely.

At a meeting with Engle last month, the Korean government turned down the U.S. automaker’s request that it participate in the debt-to-equity conversion by taking 17 percent of the new equity, which would have maintained its current 17 percent stake in the unit.

The Korean government has promised a decision after due diligence of GM Korea ends.

But there have been problems with that process, according to KDB President Lee Dong-gull on Thursday, although an outside auditor was selected last month.

“Although we agreed on a grand framework regarding the due diligence on GM Korea, GM is still refusing to open up its sensitive data,” Lee said.

Meanwhile a large group gathered in downtown Seoul to protest GM’s threatened shutting of its Gunsan plant in May, including plant employees, suppliers and Gusan residents.

“All we did was work quietly at our jobs. What have we done wrong to be thrown out into the street overnight?” asked Kim Jae-hong, head of GM Korea’s Gunsan labor union. “The union has done all we could. President Moon Jae-in should try to save the GM Korea union’s employees and the company’s parts suppliers’ families.”

The protestors claimed that 5,000 people have already lost their jobs in Gunsan since Hyundai Heavy Industries close its plant last July.

If the 13,000 people working for the GM Korea Gunsan plant employees and its suppliers lose their jobs, Gunsan’s economy will crumble along with that of North Jeolla, they said.