Animals Are Losing Their Vagility, or Ability to Roam Freely

Animals Are Losing Their Vagility, or Ability to Roam Freely 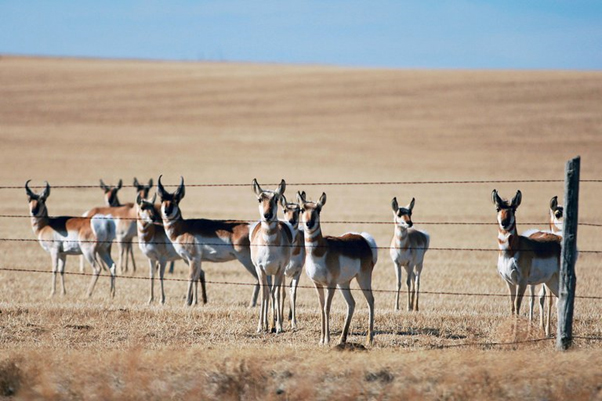 Snow comes early to the Teton mountain range, and when it does the white-bottomed pronghorn that live here get the urge to move.

Following an ancient rhythm, they migrate more than 200 miles to the south, where the elevation is lower, winter is milder and grass is easier to find. Come the spring green-up, they make the second half of the round trip, returning to the Grand Teton National Park.

After thousands of years, biologists are concerned about the future of this migration pattern. While there have been efforts to protect the journey, such as highway overpasses and antelope-friendly fences, some new barriers are looming. Most immediate is the prospect of 3,500 new gas wells planned on federal land at the southern end of the pronghorn’s migratory path. And then there’s the nearby Jonah Natural Gas Field, which is already intensively developed.

“The challenge is understanding how many holes you can punch in the landscape,” said Matthew Kauffman, a professor of wildlife biology at the University of Wyoming, “before a migration is lost.”

Room to move is critical for a wide range of species, but it has long been difficult for researchers to capture where and when they travel.

But a new and growing field called “movement ecology” is casting light on the secretive movements of wildlife and how those habits are changing.

A global study of 57 species of mammals, published in the journal Science, has found that wildlife move far less in landscapes that have been altered by humans, a finding that could have implications for a range of issues, from how well natural systems function to finding ways to protect migratory species.

The large study brought together 114 researchers from across the globe who had gathered information from 803 individual animals. They ranged from the smallest animals that can be collared — pocket mice — to the largest, elephants. Using the GPS collars that updated an animal’s location regularly and other data, the project found that vagility — the ability of an organism to move — declines in areas with human footprints by as much as half to two-thirds the distance than in places where there is little or no human activity.

“It is important that animals move, because in moving they carry out important ecological functions like transporting nutrients and seeds between different areas,” said Marlee Tucker, a biologist at Senckenberg Biodiversity and Climate Research Center and Goethe University, Frankfurt and the study’s lead author. The ability to move and find food helps keep some imperiled species viable.

There has been exponential growth in data on wildlife movement as technology has evolved, opening new windows into the secret lives of animals. “We used to have one dot on a map twice a day,” said Roland Kays, a biologist at North Carolina State University who participated in the study. “Now we have a point as much as every second and know exactly where they are going, how they are avoiding people, how they are crossing the road and catching prey. It’s big for determining how animals die or where they die and how that affects populations.”

In fact the science has advanced so much, it’s clear that the protection of these critical corridors is lagging. Ryan Zinke, secretary of the Interior Department, just announced a new effort to account for long-distance migrations that cross federal lands.

“We all know that animals go where animals want to go, and more often than not that’s dependent upon natural features like watersheds,” Mr. Zinke said, rather than whether the land is publicly or privately owned. He signed an order to foster cooperation on migrations, “working with ranchers to modify their fences, working with states to collaborate on sage brush restoration, or working with scientists to better understand migration routes,” he said.

The new migration study was made possible by Movebank, a global repository of scientific research on animal movement that has cast much new light on vagility. Records of where animals move can be shared with other researchers, and combined with data on vegetative cover, elevations and temperature, anywhere on the globe, from NASA and other sources.

“It’s an example of open data and data sharing that allows you to answer new questions and give data a second life,” said Dr. Kays, who is also a director of Movebank.

More research is needed to determine the reasons for the decline in vagility and what that means to a species.

Development threats led to the creation of the Wyoming Migration Initiative, which seeks to identify, study and protect pronghorn, mule deer and other animals’ migrations, which are increasingly at risk on the high plains because of new housing tracts, oil and gas development, roads and other barriers.

“It’s like a spring salad mix,” said Dr. Kauffman, founder and director of the migration initiative and an author on the new paper. “They go to the first patch of green-up, but as those plants dry up they move to the next spot and keep doing that.”

In the West, the acceleration of oil and gas and other development on public lands under the Trump administration could increase the loss of migration.

Many wildlife routes have disappeared. Development in Jackson Hole, Wyo. and Pierre’s Hole in Idaho, has deprived a bighorn sheep herd of their traditional winter range, and now they live solely in the Teton mountains, where they have less food in the winter and are threatened by avalanches.

Less movement among an animal population may also be caused by new food sources created by humans that animals can take advantage of. A study of fishers, a member of the weasel family, looked at movement of the animals in a variety of habitat scenarios near Albany, N.Y., from fragmented to intact areas. “The animals in suburban Albany have tiny home ranges, while the animals in state parks and forests had larger home ranges,” Dr. Kays said. “Animals in cities were more likely to get hit by cars, but also seemed to have a lot more food in terms of the rabbits and squirrels in suburbia.”

Predators may suffer more than other animals from restricted movement because they range over wider areas and encounter more development as they roam. “Wolves are caught in a pinball game, stuck between fences and highways and they can’t get around as much as wolves in wilder situations,” said Mark Hebblewhite, a wildlife biologist at the University of Montana who has a long running study on wolves and elk in British Columbia and contributed data to the new paper.

Understanding the movement of species is especially important as climate change drives species to seek more habitable terrain. Parks and preserves may offer less protection as animals migrate, and increase the need for protection of corridors so some animals can move elsewhere.

“Wild animals on an intact landscape move in sync with their needs,” Dr. Kauffman said. “When you develop the landscape, that leads to less movement and they are less in tune with the naturally occurring pulse of the landscape.”


Summary
Researchers studied the movement of 803 individual animals representing 57 animal species. The advancement of technology capable of tracking animal movement in greater detail facilitated the magnitude of this study. The research indicates the human activity alters natural animal movement. The details of the findings are presented.


Question
*How are human activities affecting animal vagility? What activities have the largest impacts on vagility?

*The article does not discuss what types of technology are used to track animal movement. How would you determine what methods researchers use to track animals?